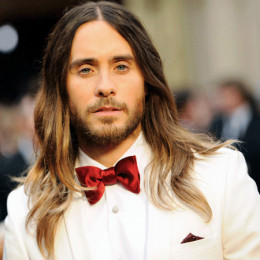 An American actor, singer, songwriter, and director who is widely known as band member for the band 30 Seconds to Mars. He has also own an Oscar for his supporting role in movie named Dallas Buyers Club. He was born to Constance Leto. When he was small his parents got divorced and he adopted surname of his step father. According to him when he was a kid he had art communal hippie experience. He attended University of the Arts in Philadelphia. He debuted in professional career from ABC teen drama My So-Called Life. In 1998 he formed Thirty Seconds to Mars band alongside with his brother Shannon Leto. Requiem for a Dream and American Psycho.are some other hit movies in which he has starred.

Talking about his relationship status he has already dated more than two dozen of celebrities. And he is still a bachelor. He has not been married yet. Currently he is single. It can be assumed that girls are not ready to trust him easily after knowing he has so many women and consider him to be a playboy. May be he will find his perfect partner in near future. He is a vegan and he is the great supporter of animal rights.