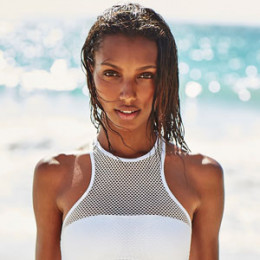 Jasmine Tookes an American model and Victoria's Secret angel. She is also one of the commercial models. Jasmine works for various brands like- Victoria Secret in America, London, and Paris including Milan. Despite her dark complexion, she is successful to build herself in this modeling industry. Jasmine is dating her boyfriend Juan David Borrero since 2016. Even she is minimalist looks gorgeous.

The stunning model, Jasmine was born on 1st February 1991 in Huntington Beach, California with the birth name, Jasmine Danielle Tookes. She has a sibling named, Chloe Danielle who is nineteen years younger than her.

Her mother is also a celebrity fashion stylist since 18 years.  Jasmine did gymnastics for ten years and was also played volleyball and softball before being a model. During her childhood, she was inspired by Tyra Banks. Jasmine was discovered in one of her mother's studio.

Jasmine started her career at the of 15. She was on track for a commercial campaign in 2010 for ugg boots and Gap. Tookes then did various fashion shows which, listed her as one of the top 10 models in September 27, 2011, fashion week post. In 2012 she was selected among the eleven models listed for Victoria's Secret Fashion show.

French Vogue, a famous magazine took Jasmine as a new face for fashion week 2012-2013.  She featured in the many editorials which include Italy, French, Spanish, German and so on. Jasmine was also in various advertisement campaigns too.

Tookes walked for various fashion houses like- Moschino, Burberry, DKNY, Prada, Tom Ford, Miu Miu, Tory Burch and many others. In 2015, she became Victoria's Secret Model and got the chance to walk the ramp promoting the brand. She wore a fantasy bra worth $ 3million in 2016 fashion show held in Paris and became the 4th black model to wear the bra in the ramp. Jasmine ranked No. 17 on Forbes, 'The World's Highest Paid Models' list in 2016. She made a guest appearance on the CBS drama, Hawaii Five-0 along with models- Jacquelyn Jablonski and Behati Prinsloo.

Tookes is of mixed heritage, and her ancestry comes from Africa, Brazil, and West Indies. She also belongs to British descent from her mother's side.

The beautiful Tookes was in a relationship with Danish model Tobias Sorensen for about four years and broke up in mid-2016. After her breakup with her ex-boyfriend, she dated Juan David Borrero, a senior partnership manager at Snapchat. As per their posts on Instagram, they are madly in love with each other and maybe soon they will get married.

The gorgeous model, Jasmine Tookes has estimated net-worth of $5 million. Her source of income is modeling, ramp walks in the various fashion house, advertisement and so on. Jasmine was paid $3 million by Victoria's Secret for walking the ramp wearing fantasy bra with 9000 diamonds in it.