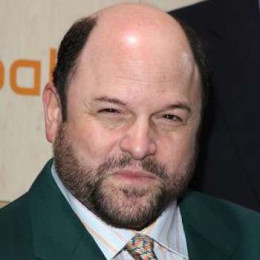 Jay Scott Greenspan, professionally known as Jason Alexander, is a comedian, actor, magician and voice artist. He is widely praised for his role as George Costanza in the TV series Seinfeld and as a lawyer Philip Stuckey in the film Pretty Woman. He was born to Ruth Minnie, a nurse and health care administrator and Alexander B. Greenspan, an accounting manager.

Accounting his personal life, he is a happily married man. He has been enjoying his marital relationship with his wife since 1981. The couple have raised two sons from their marriage. As the two seem to have a great chemistry with one another so there is no point on talking about their divorce. Besides, there is no any record of his past relationship history till date.

She is the one and only beloved wife of Jason, whom he married in 1981. It's been more than 31 years that they are staying as husband and wife.

He is the first son of Jason and his wife, who was born safe in the year 1991.

He is the youngest child of Jason, who is very disciplined and well mannered.