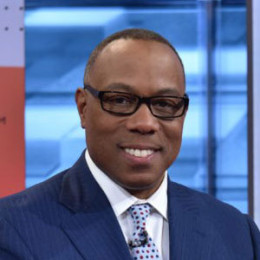 Jay Harris is a successful American sports broadcaster. He is worked for ESPN as a SportsCenter anchor since February 2003. During his tenure at ESPN, he hosted a number of shows including Sportscenter, Outside The Lines, NFL Live, Baseball Tonight, Cold Pizza, Friday and First Take as well. Furthermore, he named as one of the anchors for the new 7 a.m SportsCenter program.

Jay Harris is a born on February 22, 1965, in Norfolk, Virginia, United States of America. He belongs to American nationality and as far as her ethnicity is concerned, she is a Black American.

A native of Norfolk, Virginia, Jay attended the Old Dominion University with a bachelor’s degree in speech communication in 1987. He was brought up in his hometown Norfolk with his family. In the year 2004 and 2005, the University honored him with a Distinguished Alumni Award.

In February 2003, Jay Harris moved to ESPN as an ESPNEWS and SportsCenter anchor. Prior to working for ESPN, he also served for many years as a weeknight news anchor at WPGH-TV in Pittsburgh, Pennsylvania.

Jay has given 25 years on his networking field and has appeared on numerous TV and radio news including morning news anchor at WAMO-FM, weeknight anchor at WPGH Fox53 TV, and national news at American Urban Radio Networks so far.

Currently, Jay works as a Chair of the Student Enhancement & Engagement Committee and as a part of the Executive and Academic & Research Advancement Committees.

53 years old, Jay Harris is a married man. Jay and his longtime girlfriend Stephanie dated for many years before finally tying the knot. The couple is blessed with two children and they seem to be very careful about upbringing their children in the right manner.

Jay and his wife Stephanie might have a healthy relationship as no rumors regarding their divorce and separation has yet emerged. Currently, they spotted spending a quality time in Bristol, CT, with their two children.

Other than that, Jay is more active on Twitter, where he updates every big sports event and latest news as well.

Jay Harris is an active sportscaster who has a more than 25 years of experience in TV and radio news. She is presently working as a part of the Executive and Academic & Research Advancement Committees and as a Chair of the Student Enhancement & Engagement Committee.

Jay most maintained a handsome amount of net worth as well as earns a good amount of salary from his extensive work on his felid. Therefore we can be believed that Jay has a net worth of more than $1 million.

Jay and Stephanie have been together for a very long time. They have two children and are making sure their kids are raised right.