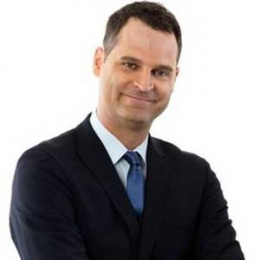 Jay Onrait is a Canadian television personality and sports anchor who is recognized for his hosting in SC with Jay and Dan on the Canadian TSN network. He frequently partnered with Dan O' Toole in several broadcastings. Jay received an award for Best Sportscaster for his incredible performance. He is married to Chobi Liang, a former PR of TSN, and had a daughter.

Jay was born on 29th August 1974 in Calgary, Alberta, Canada with the birth name Jay Michael Onrait. He was raised by his parents in Alberta, Canada.

Onrait joined the University of Alberta for the degree, but he described the year as The Lost Years. After that in 1999, he admitted to Ryerson University, Toronto and graduated with a degree in Bachelor of Arts in Radio and Television Arts.

Jay worked as an assistant editor while attending Ryerson University. It was his first step towards the career. Later on, he went to CFSK-TV in Saskatoon for sports director but became the host of The Big Breakfast on A-Channel in Winnipeg for two years.

In 2001, he worked as a host in the network flagship show, NHL on the Fly and Molson That's Hockey 2 after joining NHL Network. He hosted Sportscenter Morning Rush along with his partner Dan Toole. In 2010, he co-hosted Winter Olympic in Vancouver and Summer Olympic in London in 2012.

Furthermore, he debuted the show Fox Sports Live along with Dan O Toole in 2013 for Fox Sports 1 in Los Angeles. The contract for them dropped at the end of March and is still not renewed. Onrait won Gemini Award for Best Sportscaster in 2011.

Jay Onrait faced a painful separation with his ex-wife Darcy Modin. They got married in 2002 but the relation did not last long, and soon they divorced.

As time passed, Jay was completely healed from the pain and was again in relation with Chobi Liang, a former PR of TSN. Jay married his girlfriend, Chobi in October 2013 and had a daughter on 25th May 2015. Jay is really blessed to have such a wife who supports him in every difficult situation. Jay along with his wife and child is living a fairytale life.

The broadcaster, Jay might have a net worth in thousand. He has worked with various reputed channels so he must have a handsome salary. After the media speculation, it came to light that Jay and his partner Day are again back in TSN. This comeback will surely contribute more to his net worth.

Jay Onrait and Darcy Modin got married in 2002. After few years the couple got divorced which left Jay with a broken heart.

Chobi Liang, a former PR of TSN was married to Jay Onrait in October 2013 and had a daughter.

After few years of being married, Chobi Liang and Jay Onrait had a daughter on 25th May 2015.