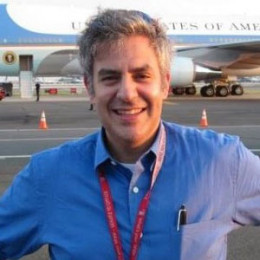 Jeff Kepnes is a Television producer working with MSNBC as the line producer for the show 'The News with Brian Williams.' He is married to his longtime girlfriend Liz Claman who is a beautiful television show host for the FoxNews Channel.

Jeff Kepnes was born in Canton, Massachusetts in the U.S.A to Judy and Joel Kepnes. His father co-owns the Bay State Auto Spring Manufacturing Company, whereas his mother works at Blue Hills Regional School as a substitute teacher.

In 2003, Kepnes joined CNN, as the senior producer at Paula Zahn Now. After that, he shifted to EP Specials at CNN in 2012.

Previously, Kepnes collected the experience of working with reputed Television Channel including Fox News. Before that, Jeff also worked at MSNBC as the senior producer.

Later, he quits his job at CNN to work for MSNBC. It was not the first time that a producer has left CNN to join MSNBC.

Jeff also handles responsibility as the SVP Programming and Development at MSNBC. Both Jonathan Wald and Kepnes work under MSNBC chief Phil Griffin.

Jeff Kepnes married his longtime girlfriend Liz Claman, a television show host for the FoxNews Channel in 1999. His wife has also hosted shows including the Fix Business, Countdown to the Closing Bell After the Bell. They have two children together which completes their happy family.

Kepnes earns a decent amount  as a senior television producer. He is working at MSNBC now for a good amount of salary, but the figure is not revealed yet. His total net worth is estimated to be in million dollars.

He is married to his longtime girlfriend Liz Claman who is a beautiful television show host for the FoxNews Channel.

He is the only son of Jeff and his wife.

She is the only daughter of Jeff and his wife, born in 2009