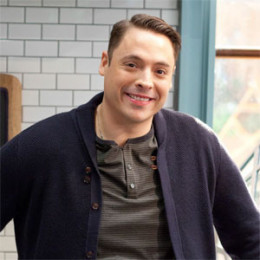 Jeff Mauro was born on July 24, 1978, in Chicago, Illinois, United States of America. He belongs to White-American ethnicity and holds an American nationality. Mauro is born to Pam Mauro and August Mauro.

Mauro obtained a degree in communications from the Bradley University in glorious Peoria.

After his graduation, Jeff Mauro became the co-owner of an Illinois restaurant, Prime Time Deli & Catering in Westmont, Ill. He then worked in the Chicago production of Tony and Tina’s Weddings.

With his incredible cooking knowledge, acting skills and improvisation skills, Mauro moved to Los Angeles to pursue his career in cooking & comedy. He tried around three years to make his debut, and along with his friend, Ali Khan, he co-starred in the gonzo cooking show concept, Chef Jeff & Ali.

After that, Mauro joined a culinary school and worked in some restaurants. He then returned to Chicago and landed himself on 7th Season of Next Food Network Star and won the title in 2005.

Additionally, Mauro also became a host of an Emmy-nominated series, Sandwich King. He got a nomination for a Daytime Emmy award for his contribution to the show, Sandwich King on the Food Network Channel in 2012.

Jeff Mauro married to his long-time girlfriend, Sarah Mauro in 2008. The duo first met in 2005 and soon after began dating. After dating around two years, the duo engaged in 2007.

They have a son, Loren Mauro. Currently, the duo is living a blissful married life in Chicago. He loves pastrami color. Mauro posts his latest and delicious foods recipe and others news on his Facebook and Twitter.

Being a successful chef, Jeff Mauro has appeared as host in the famous television show, The Kitchen from where he has earned a decent amount of salary. He also makes his salary from other shows.

Additionally, Mauro invested in some foods café and also in some restaurants. He also runs his own food-related websites where he posts some food tutorials videos. As of 2017, Mauro's net worth is estimated to be around $2.3million.