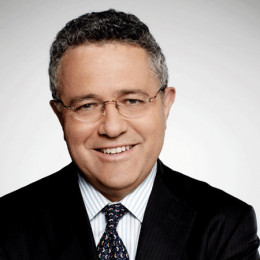 An American lawyer, an author who is better known as a legal analyst for The New Yorker and CNN. He is a son of Marlene Sanders, former ABC News and CBS News correspondent and Jerome Toobin, news broadcasting producer. He holds Bachelor of Arts degree from Harvard Law School magna cum laude. In 1986 he worked as an editor of the Harvard Law Review. He started his career as a freelance writer for The New Republic. In 1994, he worked as the television legal analyst for ABC. He is an author of a popular book named The Nine: Inside the Secret World of the Supreme Court. Currently, he is working as a staff writer at The New Yorker.

Jeffrey Ross Toobin was born on May 21, 1960, in New York City to Marlene Sanders and Jeffrey Toobin. His mother is a former ABC News and CBS News, correspondents whereas her father is a news broadcasting producer.

Toobin belongs to the white ethnicity and holds an American nationality. He is widely known as the renowned American Lawyer, blogger, pundit and legal analyst for CNN and The New Yorker.

Jeffrey Tobbin started her career as a law clerk to a federal judge. Later, he worked for Independent Counsel Lawrence Edward Walsh as an associate counsel during the Iran-Contra affair and Oliver North’s criminal trial. He also served as an Assistant U.S. Attorney in Brooklyn but after serving for three years he resigned.

Tobbin joined The New Yorker in 1993 and after a year, he became a television legal analyst for ABC. He succeeds to establish himself as an author too. He has written a book about  O.J. Simpson murder case which was also adapted in The People v. O.J. Simpson: American Crime Story.

In 2005, he analyzes the Michael Jackson’s child molestation trial. Besides this, he joined CNN in 2002 and conduct his first interview with Martha Stewart about the insider trading charges against her. He was also a member of the private discussion group JournoList.

Exploring his personal life, he is a married man. He tied the knot with Amy Bennett McIntosh in 1986. He met his now wife while they were working together at Harvard Crimson newspaper. They used to study at the same college.

Together they are parents of two children; a son, Adam Tobin, and daughter, Ellen Tobin. He was involved in an extramarital affair with the Casey Greenfield, daughter of an American television journalist. Though he was involved in his wife hasn't divorced him. It seems like she loves him very much. He has one son, Roderick Henry Greenfield from his affair. His girlfriend has already taken sole custody of their son.

They first met each other at Harvard Business School. She is executive at Verizon and Zagat Survey. Together they are parents of two children.

He is the only son from their relationship. His mother has already took his sole custody.

She is gorgeous and healthy girl. Her picture along family can be found in different sites.

He is the only son beside one daughter from his marriage. He resembles more like his mother.