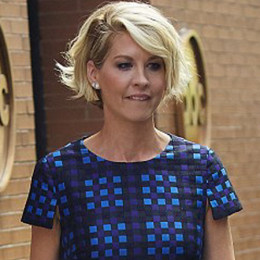 Jenna Elfman is an American television and film actress. Jenna who stands at a height of 5 ft 8 inches is married for nearly two decades and living a happily married life with two children.

Golden-Globe winning television and film actress Jenna Elfman is well known for her part as Dharma in an American TV sitcom "Dharma & Greg" which aired from 1997 to 2002.

The 45-year-old Jenna Elfman was raised in Los Angeles and is the youngest of 3 children, to Sue Butala, a homemaker, and a Hughes Aircraft executive, Richard Butala. She is of Croatian ancestry and holds American nationality.

Jenna Elfman studied in Los Angeles County High School for the Arts and got her degree from California State University, Northridge (CSUN).

Jenna Elfman started her career as a dancer, performing in the music videos for “Depeche Mode” in 1990, “Black Lodge” song in 1993, in 1995 she appeared “Somebody’s Crying” and toured alongside the rock band ZZ Top as  “Legs Girl” in 1994.

After appearing in several videos, Jenna Elfman was cast in the short-lived American sitcom titled “Townies” on ABC. In 2012, she and her beau Bodhi began their podcast, “Kicking and Screaming by Jenna and Bodhi Elfman”.

In 2013, Jenna Elfman appeared in two NBC comedy series “Growing Up Fisher”, and “1600 Penn”, which got cancelled after a single season. She was also a cast in the ABC comedy-drama “Imaginary Mary” in 2016.

Jenna Elfman is a member of the “Church of Scientology”. In 2005, she appeared at the Scientology-backed Citizens Commission on Human Rights “Psychiatry: An Industry of Death” a museum grand opening.

On 24 May 2006, Jenna Elfman was the guest speaker at the Human Rights Hero Award, formed with a purpose to bring artist together for the common cause of raising awareness of human rights all over the world.

Well, talking about Jenna Elfman's personal life, she is a married woman and mother of two sons. Jenna first met her future husband, Bodhi Elfman, an actor, at a Sprite commercial audition in February 1991. Soon after, they fell in love and started dating.

On 18 February 1995, Jenna tied the knot with her longtime boyfriend, Bodhi Elfman. On 23 July 2007, Jenna gave birth to her first baby, a son, Story Elias Elfman, and on 2 March 2010, she was blessed with the second child, a son, Easton Quinn Monroe.

Jenna and Bodhi have been married fo two decades now, and it seems their romance is still sparkling like they met the first time. Well, they are living a happily married life with their two sons.

The multitalented woman Jenna Elfman has an estimated net worth around $16 million dollars. She earns a handsome sum of money through her acting career which includes both TV series and movies.

Jenna Elfman first met her future husband, Bodhi Elfman, an actor, at a Sprite commercial audition in February 1991. Soon after, they fell in love and started dating. On 18 February 1995, Jenna Elfman married her longtime boyfriend Bodhi Elfman. The couple is blessed with, two sons. On 23 July 2007, Jenna gave her first baby, a son, Story Elias Elfman, and on 2 March 2010, she gave her second child, a son, Easton Quinn Monroe.

The 9-years-old Story Elias Elfman was born on 23 July 2007 in Loss Angeles. He is the first baby of his parents.

The 7-years-old Easton Quinn Monroe was born on 2 March 2010. He is the youngest son of Bodhi Elfman and Jenna Elfman.