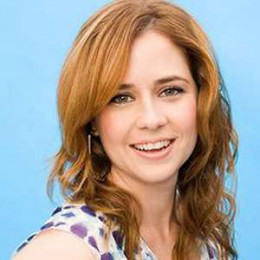 Jenna Fischer is an American actress known for her recurring role as Pam Halpert on the hit sitcom 'The Office". Her chemistry with John Krasinski was critically acclaimed by many. They looked like a real ideal couple that carries the great fairytale.

Who Is Jenna Fischer Married to?

Jenna Fischer, a 45-year-old actress has been married twice in her life. She is currently married to the love of her life, Lee Kirk. The duo tied a knot in 2010 followed by their engagement in 2009. Lee is a screenwriter by profession.

Fischer and Kirk are the proud parents of two adorable kids, Harper Marie Kirk and Weston Lee Kirk. Jenna and Lee. She announced her pregnancy with their first child in May 2011.

Jenna gave birth to her first child, a son in September 2011 and daughter in May 2014. The family of four currently resides in Los Angeles, California, U.S.

Fischer was previously married to James Gunn on October 7, 2000. The pair announced their split in September of 2007 and divorced in 2008. However, in 2010, Jenna helped James with casting her The Office co-star Rainn Wilson in Gunn's film Super.

Jim and Pam from The Office

One of the widely popular pair in television history should definitely be Jim and Pam from The Office. Their intimacy at the workplace blossomed from colleagues to a married couple throughout the span of the show's run. They had a romantic fairytale and were amazing soulmates.

Amid a recent interview with  Entertainment Weekly, Jenna Fischer, and John Krasinski who played Jim and Pam showcased on the fan-favorite couple. The duo celebrated their tenth year anniversary in October of 2019.

How Much Is Jenna Fischer's Net Worth?

Jenna Fischer has an estimated net worth of $15 million. She is considered the highest-paid actress of The Office. Jenna receives $100 thousand per episode for season one to three. In the beginning, she earned $20,000 per episode.

Fischer first began her career working in a professional theatre. While attending college in Missouri, she used to perform with a touring Murder Mystery Dinner Theatre group.

As a teenager, the starlet moved to Los Angeles and began performing Commedia with the Zoo District Theatre. Jenna Fischer studied acting as a child and went on to do a variety of TV and film work. She has starred in a variety of films, including 'Blades of Glory' and 'Walk Hard: The Dewey Cox Story'.

James Gunn is an American screenwriter, director, producer, novelist, actor, and musician. They got married after dating for a brief period.

Lee Kirk is an American film director. They got engaged in 2009 and married in 2010. As of now, there are no signs of their separation.