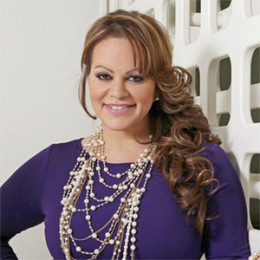 Dolores Janney Rivera Saavedra aka Jenni Rivera was an American songwriter, television producer, singer, spokesperson, philanthropist, actress, and entrepreneur. She was well-known for her work in Banda and Ranchera music genres. She was also best known for releasing hit albums in Spanish and producing many reality TV series featuring her family.

She was also named as "top Latin artist" and "best-selling Latin artist" of 2013 in Billboard Magazine.
Rivera was married, woman. She had married three times and blessed with five children. On December 8, 2012, she died at the age of 43.

Mexican-American singer, the songwriter was born on 2nd July 1969 in Long Beach, California to the father Pedro Rivera and mother Rosa Saavedra. Her father was a businessman and a bartender.

When she was 15 years old she became pregnant while she was working towards her General Education Development at a continuation school and graduating as class valedictorian.

She attended California State University and obtained the college degree in business administration. Before going to work for her father's record label she worked in real estate.

Jenni Rivera began recording music in 1992 which contain the theme of social issues, relationship, and infidelity. Si Quieres Verme Llorar was her first studio album which was released in the 1990s. Her first album got commercial success which led her to major label debut, Parrandera Rebelde y Atervida. Likewise, she has published more than ten studio albums.

In 2007 she earned Lo Nuestro Award for Regional Mexican Female Artist of the Year for performing Banda music (a male-dominated music genre). She earns Nuestro Award for nine consecutive times. In 2008 her another studio album Jenni became her first No.1 record on the Billboard Top Latin Albums chart in the US.

In 2010, Rivera produced and perform in the reality Television show Jenni Rivera Presents Chiquis Rivera and Raq-C. Also, she appeared and produced I Love Jenni. Her acting debut was in the film Filly Brown which was released in 2013.

A well-known singer Rivera had estimated a net worth of $25 million. She published many studio albums which are kept on Amazon for sale from starting price $0.9 to $9.99. She had a car collection of GLA 250 which price ranges from $40,800.

Jenni Rivera was married women. She was married thrice and blessed with five children. When she was 15 years old she became pregnant and give birth to her first baby girl Jenny Chiquis Marin Rivera. She married to the baby's father, Jose Trinidad and the couple had two more children, Jacqueline Trinidad and Michael Trinidad. In 1992 Rivera decided to split from Jose because of physical and emotional abuse he was inflicting on her.

In 1997 she married her second husband Juan Lopez. The duo blessed with two children Jenicka Lopez and son Juan Angel Lopez. After six years of marriage, the duo was separated in 2003. Lopez was convicted of selling drugs and while he was serving his sentence in the prison he died from complication of pneumonia in 2009.

Then in 2010, she got married to baseball player Esteban Loaiza. The couple doesn't share any children. Just a month before her death, the couple filed a divorce in 2012, though, the divorce is not finalized, yet.

In the Memory of Jenni Rivera

In the memory of Jenni Rivera, Rivera's family published a book Unbreakable: My Story, My way in 2013 July 2. The English version of the book sold over 9000 copies in the first week.

On the occasion of 25th anniversary of Premio Lo Nuestro, in 2013 they dedicated an award ceremony to her where she received a tribute by various artists as they sang songs where she had performed earlier.

On the same day, she was also awarded by five awards including Artist of the Year By Latin Billboard Music Awards. Also, her brother Juan Rivera performed on her song No Llega el Olvido at the ceremony.

In Long Beach, California at Walnut Avenue, the 20th Street Councilman Dee Andrews named a park named on her name in order to show their affection towards her. The park was named Jenni Rivera Memorial Park.

At that time councilman, Andrews said that

"Jenni was an inspiration to us all. By honoring Jenni Rivera with a Memorial Park, the City of Long Beach will be paying the tribute to a great citizen of our city who was a remarkable entertainer, inspirational leader and amazing ambassador of all of the long beach".

Long Beach City formal hosted a huge opening ceremony of the park on 2nd July 2016. The ceremony was featured with 125 foot long mural of Rivera.

Rivera, on August 6, 2010, was named the spokeswoman for the National Coalition Against Domestic Violence and she has supported American Heart Association and American Stroke Association. For her charity work and involvement in the community, Los Angeles City Council announced August 6 as Jenni Rivera Day.

In 2008, Rivera was arrested for the assault, when she hit a fan onstage with her microphone. Rivera swears that the fan threw a cab beer at her injured leg. She was detained for some hours and released after paying a $3000 bail.

After few months, news of a Jenni Rivera's sex tape stolen from her house hit the media and again Rivera became the object of controversy. According to the New York Daily News, Rivera worked as a performer of drugs cartel parties in 2009. xxxx

She was raped, after filming her first music video La Chacalosa by a man who advanced her earlier the evening of the music video shooting. She rejected him which led to the tragic incident.

Cause of Rivera's Death

48 years old Jenni Rivera died in the plane crash in Mexico on December 9, 2012. Her body was finally buried on December 31 in Long Beach California. Her death made international headlines for weeks.

When she was 15 years old she became pregnant and give birth to her first baby girl Jenny Chiquis Marin Rivera. She married her first baby's father, Jose Trinidad and the couple had two more children, Jacqueline Trinidad and Michael Trinidad. In 1992 Rivera split the relation of marriage due to physical and emotional abuse.

In 1997 she married to second husband Juan Lopez. The duo blessed with two children daughter Jenicka Lopez and son Juan Angel Lopez. After six years of marriage, the duo was separated in 2003. Lopez was convicted of selling drugs and while he was in prison in 2009 he died from complication of pneumonia.

Again in 2010, she got married to baseball player Esteban Loaiza. The couple didn’t blessed with any children. Just a month before her death, the couple filed a divorce in 2012, but the divorce was never finalized.