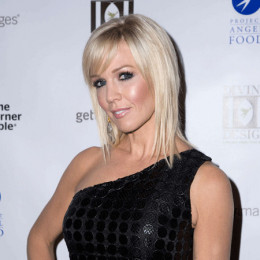 Jennifer Eve Garth commonly known as "Jennie Garth" is an actress, social activist and film director, best known for playing in the Beverly Hills, 90210 franchise as Kelly Taylor and on the sitcom What I Like About You, as Valerie Tyler. She has starred in her own reality show in the year 2012 titled "Jennie Garth: A Little Bit Country" on CMT. She is the daughter of John and Carolyn Garth. She has won two Young Artist Awards and a Teen Choice Award.

Talking about her personal life, till now she has been married thrice. Her first marriage lasted only for two years and with her first husband she does not have any children. And with her second husband she stayed for 12 years and together have raised three children. Now she is married to a dashing actor with whom she is spotted quite often. In her past days she has dated few guys.

He is the first husband of Jennie whose image are available on the internet. Detailed information about their relationship are still unknown.

He is an actor and a model. The couple together has raised three beautiful daughters from their marriage.

He is an actor. The couple first met on a blind date and they became engaged in April 2015.

She is the first child of Jennie whom she gave birth at the age of 25.

She is one of the adorable child of Jennie whom she gave birth at the age of 30.