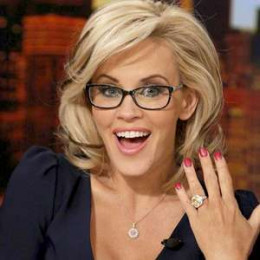 An American model, television host, comedian, actress, author, screenwriter and anti-vaccine activist, Jenny McCarthy is currently married to singer Donnie Wahlberg on 31 August 2014. Jenny was born to a housewife, Linda, and steel mill foreman Dan McCarthy. She Graduated from Mother McAuley Liberal Arts High School in Chicago. Jenny began her career in 1993 as a nude model for Playboy magazine, then parlayed her Playboy fame into a television and film acting career.

Jenny McCarthy was previously married to John Asher in 1998 but they ended their marriage relationship in 2005.

Currently, she married to Donnie Wahlberg. They were dating for 1 year after getting together in Apr 2013. After 4 months of engagement, they married on 31st Aug 2014.

Evan Joseph was born on 18 May 2002. He is the first child of her. His parents' already got divorced.