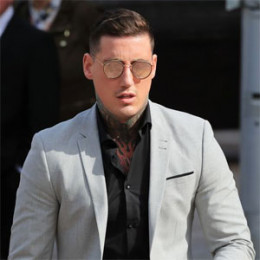 Jeremy McConnell is a 27-year-old Irish model and reality television star who rose to fame with MTV show "Beauty School Cop Outs". He is best known for his appearance in the seventh series of British TV program, Celebrity Big Brother.

Jeremy McConnell was born in Dublin, Ireland, on 22 February 1990. His zodiac sign is Pisces. He is Irish by nationality and belongs to the White ethnicity. His parents divorced when he was just 1 year old. Since then, she started living with his mother.

He has a very tragic childhood as he lost his mother at 15 due to a brain hemorrhage. After 15 months, his bother died from a motorcycle accident and sister died of a heart attack after suffering from epilepsy.

Jeremy McConnell began his career as a struggling model. In 2012, he participates in Mr. Ireland and finished up with the runner-up. He made his TV debut in 2016 with MTV show, Beauty School Cop Outs, the show includes the British and Irish youngsters and teach them the tricks of the trade.

Later, he appeared in the Celebrity Big Brother House in the 17th installment. He was the sixth house member to get evicted from the show due to the least amount of votes. He spends almost 25 days in the house and refers those days as memorable days of his life where he made new friends and learned new things.

McConnell is unmarried and has no children. He previously he dated an English actress, Stephanie Davis. The duo first met in the house of Celebrity Big Brother in 2016

They even had a Live-in relationship but after sometimes they feel their relationship as a burden and after constant fights and misunderstanding they split apart in 2017.

Prior to Stephanie, he had two girlfriends whose information has not been revealed yet.

The Reality star, Jeremy McConnell might have earned a good sum of amount form his career. He has a good net worth as well.