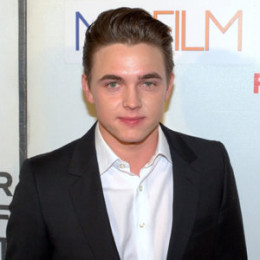 An American singer, songwriter, and actor who is better known for starring as JR Chandler on the show named All My Children and also as the band member of the boy band Dream Street. He is son to Ginger and Scott McCartney. When he was just seven yeas old he started to perform in local community musicals. He also sang in collaboration with the group Sugar Beats in 1989. He was the member of American pop boy band Dream Street since 1999 to 2002. His songs like "Leavin" and "Beautiful Soul" helped him more to reach the height of success. Talking about his acting career he lent his voice as Theodore in the Alvin and the Chipmunks franchise. He has also made guest appearance on ABC Family Series Young & Hungry. He has his own women's fragrance brand called Wanted By Jesse.

Talking about his personal life, Jesse is dating a hot and beautiful girl who is also an American actress and model best known for the leading role of Rebecca in horror comedy movie Girls Gone Dead which was released in 2012. The couple is in a serious relationship since 2012. Prior of being in relationship with her, this handsome man has dated 6 popular celebrities already. Though he was rumored of dating Cousin of Miley Cyrus, he didn't official confirmed the rumor.