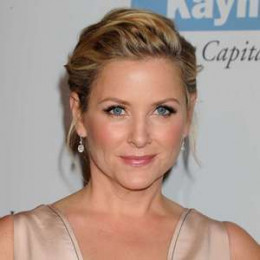 Jessica Capshaw is an American actress best known for playing lawyer Jamie Stringer on The Practice and a lesbian doctor Arizona Robbin on the ABC drama "Grey’s Anatomy". She was born to father Robert, a sales manager, and mother Kate Capshaw, who later became a successful Hollywood actress. Her parents splitted when she was 3 years old. Jessica completed he schooling from Harvard-Westlake School and then went to Brown University.

Jessica Capshaw landed her first major TV role on the sitcom Odd Man Out, in 1999. From 2002 to 2004, she played a lawyer on The Practice. In 2009, she earned the role of Dr. Arizona Robbins on Grey's Anatomy. She is the granddaughter of the famous American director Steven Spielberg. Jessica is married to Christopher Gavigan and has four children with him, two sons, and two daughters.

Capshaw married writer and founder of a child health non-profit organization, Christopher Gavigan on May 22, 2004 at Capshaw’s estate. The couple has four children together.

First son to this couple Luke Hudson was born on September 8, 2007.