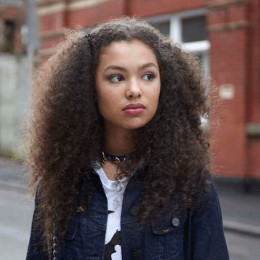 She is a Welsh actress, best known for playing in the third generation of the British TV series Skins, as Grace Blood and in Honeytrap, as Layla. Her father is half German and half Estonian, where as her mother is half Afro-Hispanic and half Chinese. From Gorseinon College, she completed her A-levels in Drama, Spanish and French. In 2011, she made her television debut playing in the fifth and sixth series of teen drama Skins.

Accounting her personal life, she is straight and there is no any objection regarding her sexuality till date. She has stated herself of being single, but being so pretty and popular she might have been receiving lots of proposals day and night. Till now there is no record of her affairs and other such relevant activities. She hasn't been a part of any controversial issues till now.