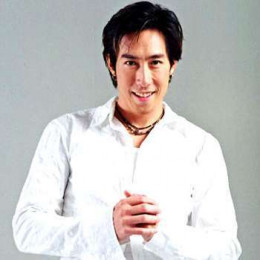 Jetrin Wattanasin is Thai pop musician, singer, dancer, and actor. He is promoted by Thai Entertainment Company, GMM Grammy. He started his career since 1991. He had produced many successful songs and had concert in12 U.S cities. His debut album is Jor-Ae-bor. His father is former badminton champion of Thailand Charoen Wattanasin and mother chit Wattanasin. He is the second child of his parents. His elder brother is also a famous singer. Jetrin also uses the instrument, Drums.

He current relationship status is married and he is married with actress Kejmanee Pichaironnarongsongkhram in2001. Before that, he was married to Gina Nalamliang Li miss Thailand runner-up of 1992.He has one child with first wife and 3 with the second wife. Jetrin is gentle and respects every occupation. He is internationally famous but he isn’t proud of that. He thinks of making life meaningful. He is keeping healthy relation with his wife. He isn’t found dating anybody though he is famous and rich.

Kejmanee is actress,model and singer. She got engaged with Jetrin in 2001. She is a loyal wife to her husband and taking care of her four children responsibly.

Gina is Miss Thailand runner up of the year 1992. She got engaged with Jetrin and have one child. They got divorce due to misunderstanding.

She is the only daughter of her mother. She is pretty and wish to become actress and want to play in Hollywood movies

He is the second child of Jetrin and firstson to Kejmanee. He wants to be athlete and he is in his starting career and wishes to be famous.

Jaosamut is second children to his parents. He is in his high schools and is good in his studies.

He is the youngest of all Jetrin's children and is loved byall. He is currently in his junior High School.