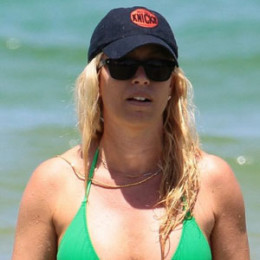 Jill Martin, 41, is an American sportscaster and TV personality. She rose to fame as an on-air reporter for the New York Knicks. Besides, she also worked as an entertainment and fashion contributor for the Today Show. Jill was a correspondent for the summer Olympics in Rio in the year 2016. In addition to her journalism career, she is an author who published her book I Have Nothing To Wear! in 2011 which was a New York best seller.

Jill Martin was born on April 14, 1976, in Manhattan, New York City, New York, United States. She was raised up in Plainview, New York, where her family still lives. She received a degree in communications from the University of Michigan.

Jill interned for various TV shows including Regis and Kathie Lee and Geraldo during her time at the University of Michigan. She belongs to American nationality and belongs to white ethnicity.

Four times New York Emmy Award Winner Sportscaster, Jill Martin started her career in journalism by working with The Maury Povich Show as an assistant. She started a segment called “What’s Hot in the Hamptons” serving as an entertainment reporter at News 12 Long Island after which she became the first NBA in-arena host for the Miami Heat.

While interviewing celebrities, Martin also participated in court shootout during time-outs and defeated many big celebrities such as Jimmy Buffett and Martin Lawrence. She currently works for the NBC’s Today show as a sportscaster and a contributor.

Jill is not married yet. However, she was recently spotted with the unidentified guy. The first NBA in-arena host, Martin was seen hanging out with her tall, dark and handsome stud who could possibly be her boyfriend in the beach of Florida.

The 41-year-old hasn’t made her relationship public, even the name of her alleged boyfriend is a mystery. Previously, she dated an American actor Steve Guttenberg in 1985.

Other than that, Jill supported a charity event in response to the Katrina disaster alongside Loews at the at the Loews Miami Beach Hotel. The charity event grossed $750000 to benefit the victims and their family members.

Jill has gained a number of Awards from her brilliant work. She is also a fashion expert. Martin is one of the most valuable Sportscaster in NBC’s Today Show. Therefore, she earns a good amount of salary from her extensive work on TV.

After getting a huge success in the TV work, she maintained a good financial status. Although the exact figure of her net worth isn’t revealed, looking at her lavish life, Jill may have a net worth in millions of dollar.