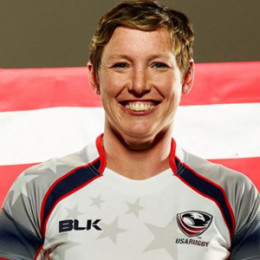 Jillion Paige Potter, better known as Jillion Potter is an American professional rugby union player. She is the captain of the 2016 USA Olympic Women’s rugby sevens team who is a real fighter. Even after struggling with stage III cancer, she is always seen dedicated to her work and living her life to the fullest. Being openly gay, she is married to her wife Carlo Fabrizio who fully support her in each and every step of her life.

She did her higher education from the University of New Mexico from where she began her rugby career. She planned to walk on the women’s basketball team but some of the girls asked her to check out the club rugby team but she declined it first.

After she joined the team, her mother bought her a Rugby for Dummies book off eBay. She had no any idea what the rules but soon after she stepped in the field, she found the game exciting. In 2005, she made U.S. under-19 team and was fast-tracked to the senior side development program.

Jillion Potter made her Women’s Eagles debut on 2007 after she became the member of national team. After college, she moved to Minneapolis with the goal of making the 2010 World Cup team.

The dream broke after she injured her neck in the game against Canada. The injury not only threatened her career but easily could have paralyzed her. She put on a neck brace and continued working out while awaiting the results of an MRI. As per the MRI, the doctor recommended surgery and told her she could never play rugby again.

Then a USA Rugby doctor stepped in, recommending her to see another doctor who had operated on NFL players. He proposed a surgery which might save her career. She set her sights on making the 2014 World Cup team but then another opportunity beckoned.

She had been playing the version of the game known as 15s but in 2012 she was invited to join the U.S. Sevens team which is the form that will be played at the Olympics. In the Rugby World Cup Seven 2013, she won a bronze with her team in Moscow, Russia and represented the Eagles at Women’s Rugby World Cup 2014 in France.

Once again, she missed the 2014-15 Women’s Seven Series: as she was diagnosed with stage III synovial sarcoma but beat the illness and returned to the Olympic Training Centre ahead of the 2015-16 Series.

After playing in 22 of the team’s 29 matches, she worked her way back into the starting role she held before her absence and was named to the 12-player Team USA Squad for Rugby Sevens’ debut at the Rio 2016 Olympic Summer Games.

Jillion Potter is in a marital relationship with Carol Fabrizio, since 2013. The couple first met in the year 2011 through rugby and are happily together ever since.

As per the sources, the lesbian partner married in the year 2013 at a private ceremony with the involvement of some close family members and friends.

Since the pair lives a private life and does not share their personal life. They support each other in each and every step of their life and still together. There is no such news regarding their rumors and separation.

Jillion Potter has successfully collected lucrative net worth of $0.2 million from her career.

Jillion Potter is married to Carol Fabrizio. She loves flossing her teeth and makes her wife carry all the flossing materials with her everywhere. The couple is living a happy married life and there is no sign of divorce.