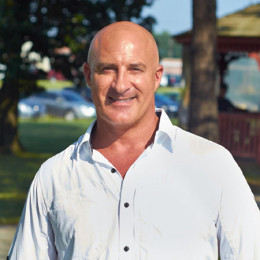 He is a meteorologist and Media Personality of American Nationality. He is best known as an anchor of The Weather Channel. In 1986, he graduated from Lyndon State College. When he was in college, he interned in same channel. He has established himself as on of the best meteorologists. He has also reported from big events like Space Shuttle Discovery launch. He has already been approved as certified meteorologist by AMS Television Seal of Approval.

There was a rumor and gossip that he is a gay but the news has not been proved yet. While exploring his private life, he was married to his longtime sweetheart whom he had met in The Weather Channel. They are divorced now. The couple is blessed with two children. His wife is a victim of Parkinson’s disease and his children are also suffering from Fragile X syndrome. There is no rumor of an extramarital affair from both sides.

Jim D. Cantore was born on February 16, 1964, in Beacon Falls, Connecticut but he was raised in White River Junction, Vermont.

Cantore completed his graduation from Lyndon State College in 1986. The same year, he got his first job as an intern in the Weather Channel as the weather forecaster. During his college days, he used to call Rocky by his friends because of his looks.

Jim rose to fame because of his coverage of hurricanes like; Andrews, Gustav, Isabel, Floyd, Rita, Mitch, Bonnie, Sandy, and Irene. He reported events such as the Space Shuttle Discovery launch, the "Winter X Games," PGA tournaments, NFL games, and more.

Even Cantore is a member of both the National Weather Association and the American Meteorological Society. In 2002, he received the NOAA-David S. Johnson Award for his innovative use of environmental satellite technology.

Despite from live reporting, Jim also serves as the narrator on the TWC series Storm Stories. He has contributed in Make a Wish Foundation, Michael J Fox Foundation by giving away his beneficiaries.

Jim has earned a decent amount of net worth from his career and succeeds to collect the net worth of $3.5 million. On the other hand, he gets an impressive salary for his contribution towards TWC.

Jim is in a romantic relationship with Andrea Butera of CNN since 2010 and still, the couple shared a good equation. However, previously he was married to his long-term girlfriend,  Tamra Cantore, whom he met while at TWC.

The duo shared two children; a daughter Christina (born on 1993) and a son Ben (born on 1995). The couple couldn't handle their relationship and had divorced in 2009. His ex-wife is suffering from Parkinson's disease and both children have Fragile X syndrome.

His ex-wife is suffering from Parkinson's disease and both children have Fragile X syndrome. Once it was rumored he was a gay but the rumors end with his relationship with Andrea.

She works as a Weather Channel's prime time program. She is a victim of Parkinson’s disease. She is the mother of two children. Reason behind their divorce is still unknown.

She is the elder daughter of the family. Her picture along with her family can be found in different sites.

He is the youngest and only son of the family.