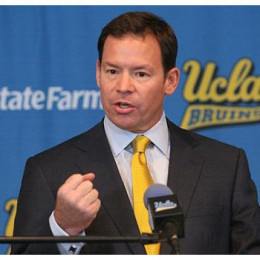 James Lawrence Mora best known as "Jim Mora", is a head coach of the UCLA Bruins of the Pac-12 Conference. In 1984, he started his coaching career at University of Washington, as a graduate assistant. Previously, he was a head coach in the National Football League, coaching the Atlanta Falcons and Seattle Seahawks. He was born to Connie Mora and Jim E. Mora, a retired NFL head coach.

He is a married man, who has been enjoying his marital relation with his beloved wife for more than 22 years. The couple is very active in charitable works and has donated a lot till date. The two runs the Count On Me Family Foundation with the aim of helping children with low socio-economic backgrounds, mental and physical disabilities. They have raised 4 children together: a son and three daughters.

She is the one and only beloved wife of Mr. Mora, with whom he had dated for almost 10 years before deciding to marry her.

She is the only daughter of Mr. Mora, whose current status is unknown.

He is the son of Jim, whose date of birth and current status has not been disclosed to the media yet.

Jim's son Ryder is a sophomore at Loyola High School in Los Angeles and is a member of the Lacrosse team.

He is one of Mora's son, who is very well mannered and obedient.