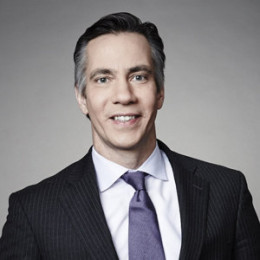 One of the most proclaimed journalists, James Earnest Sciutto is an American correspondent. He started his career working as a moderator and producer of ‘Public Broadcasting Service’ program. In the year 1998, he became associated with ABC News based in Chicago. At the present time, he is working as Chief Nationality Correspondent at CNN where he reports and provides all information related to US National Security. He is serving as Chief Nationality Security Correspondent since 2013.

Jim Sciutto was born as James Ernest Sciutto on March 10, 1970, in the USA. Nationality wise he is an American and his ethnicity is white. Sciutto is popularly known as Chief National Security Correspondent for CNN.

Jim joined Regis High School in Manhattan. In 1992, he completed his graduation from Yale University and majored in Chineses history.

Sciutto began his television career as the moderator and the producer of a Public Broadcasting Service program. Later, he served in the weekly public affair, The Student Press. He is also known as the Hong Kong correspondent for Asia Business News.

He covered stories in different countries like; China, Mongolia, Laos, Vietnam, Singapore, and South Korea. In 1998, he joined ABC News and in 2006 he became the ABC's lead reporter on foreign stories. He has traveled in more than 50 countries.

Jim was honored with many prestigious awards which include; Edward R. Murrow Award, George Polk Award, Fulbright Fellow and much more. Even he was awarded Emmy awards in 2004 and 2005 for best story in a regularly scheduled newscast for his reporting in Iraq.

Jim Sciutto is a married man, he exchanged a vow with Gloria Riviera, ABC News Correspondents in 2006. The duo first encounters in ABC studio while performing their job.

The duo shared three children; two sons, Caden and Tristan, and daughter. The duo welcomed their daughter in 2015 but they prefer to keep her far from the limelight.

Previously, Riviera was married but due to some irreconcilable differences, she had to end her married life on a sad note.

Recently, Jim is living a happy married life with his wife and children and there aren't any kinds of rumors regarding their split or an extramarital affair. In past also, he never linked up with any woman.

Besides being in a relationship with wife Gloria, he was never linked up with any other celebrity stars or colleague.

Emmy winning journalist, Jim Sciutto has earned a decent amount of net worth from his journalism career. He has an estimated net worth around $4 million and gets a handsome salary from his work.

Besides this, he is living a lavishing life along with his family in the USA. After winning the Emmy his salary gets exceeded in a very impressive way.

The lovely couple got married on 27th October, 2006. As of now, the dashing correspondent Jim Sciutto is spending luxurious moment with his wife Gloria.

Caden is the first son of Jim and Gloria. His information hasn't disclosed yet.

Tristan is the second son of his parents and he has one elder brother and one sister.

She is the only daughter of Jim and his wife. She is as beautiful as her mother.