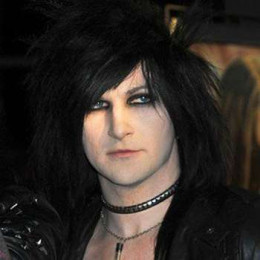 Jeremy Miles "Jinxx " Ferguson is a multitalented musician best known as the rhythm guitarist, violinist, and backing vocalist of American rock band 'Black Veil Brides'. He is the son of Susan Becker and Brent Ferguson. He joined 'Black Veil Brides' in mid-2009 when Andy Biersack was reforming his band in Hollywood, California. He has also played in the bands The Dreaming, Amen, Team Cybergeist, and The Drastics. He got his first guitar when he was two, and started playing live shows with his father at the age of eight, mainly playing in local bars. He has own 'Revolver Magazine's Golden Gods Award for "Best Guitarists 2012".

Currently his relationship status is single. Few years ago he was tied by the bond of marriage to a famous photographer and vocalist. He had dated that girl for five years but with in two years of marriage they got divorced. They were in relationship for seven years. The exact cause for their wind up is still unknown. After this separation no other information about his marriage or relationship is disclosed yet. To be in touch follow him at @Jeremy_Miles on twitter.

Sammi Doll who is also a vocalist was engaged to Miles after five years of dating. This beautiful couple got together for around seven years. They started dating on 7th March 2006 and split up on 24th November, 2013.Both being of same profession were thought to have common perspective. They have not revealed the cause behind their detachment.