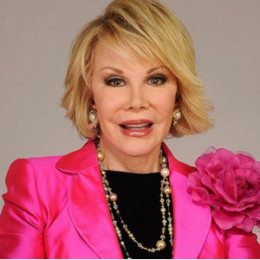 Joan River is originally known as Joan Alexandra Molinsky. She was an American comedian, actress, writer, producer, and television host. Joan is widely known for her movies such as Fashion Police, and her show The Joan River Show and is also noted for her often controversial comedic persona especially towards celebrities and politician. Joan River is the first women to host a late night network television talk show and even won a Daytime Emmy for Outstanding Talk Show Host. Rivers is also an author of 12 best selling books and numerous comedy albums. She has been nominated for different awards such as Grammy Award for her album and books.

Rivers was married on 1955 to James Sanger, the son of Bond Clothing Stores merchandise manager. This was her first marriage yet it only lasted six month. This marriage was annulled on the basis that Sanger did not want children and has not informed Rivers about this before their marriage. Rivers then married Edgar Rosenberg on July 15, 1965 and had a child, Melissa Warburg Rosenberg. Edgar later committed suicide the River announced her intention to separate. Later in the year 2012, Rivers confessed in an interview with Howard Stern, that she had several extramarital affairs when she was married to Rosenberg including one night stand with actor Robert Mitchum in 1960 and also had affair with actor Gabriel Dell. Rivers married Edgar Rosenberg on July 15,1965. This couple had only one child Melissa Warburg Rosenberg.