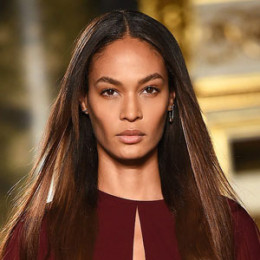 Joan Smalls Rodriguez is a Puerto Rican fashion models who was ranked as no. 1 model in the world. She was selected as 1st Latina to become a spokesperson for Estee Lauder. She has modeled for top designers and fashion houses such as Gucci, Marc Jacobs, Tom Ford, Chanel, Alexander Wang.Small is the global beauty ambassador.

Joan Smalls was born on July 11, 1988, in Hatillo, Puerto Rico. Her father is an accountant from Saint Thomas, West India, of African ancestry and mother Betzaida Rodrigues, a Puerto Rican social worker, of Spanish and Indian heritage. Smalls graduated from the Interamerican University of Puerto Rico with a Bachelor’s degree in Psychology and moved to New York after her graduation.

In the year 2007, Joan was signed by Elite Model Management with the IMG model. She modeled for the fall Tory Burch Presentation in New York and appeared in Liz Claiborne print ads alongside Anouck Lepere. She walks for Benjamin Cho, L Wren Scott, Tracy Reese, and Heatherette. By2008, she was signed with IMG in the year 2009. Smalls signed a Givenchy show in January 2010. She appeared in Italian Vogue editorial, Photographed by Patrick Demarchelier and was one of the faces of Gucci and began modeling for Victoria’s Secret, in New York, London in the year 2010. In the same year, she appeared in various Vogue editorials, photographed by Mario Testino, David Sims, and Norman Jean Roy and was featured on the fall cover of-D-, Photographed by Danielle and Lango.

Smalls appeared in the music video where she co-starred with actor Michael K.Williams and also starred in a short film for the American rapper ASAP Rocky’s track Phoenix.

In 2013, she appeared in Beyonce's  Younce video and later signed as global beauty ambassador. In January 2014, she appeared on the Return of the Supermodel cover of American Elle.

In September 2012, Small was named Model of the year at the 9th Annual Style Awards and was ranked no. 8 on Forbes magazine’s Worlds Highest-Paid Model list. Joan features in the article The Return of the Supermodel: It’s Joan Smalls.

Joans has associated herself with a non-profit organization called Project Sunshine where she helps children with medicinal needs. Joan is in long term relationship with Bernard Smith, an Amerian Businessman and founder of Moudellounge, since the year 2011. Despite the fact that she has been together with her boyfriend for more than six years, marriage doesn't seem to be on their agenda right now.

Smalls' annual salary is estimated to be $3000,000. With such impressive salary, Small’s has managed to acquire net worth around $9 million.