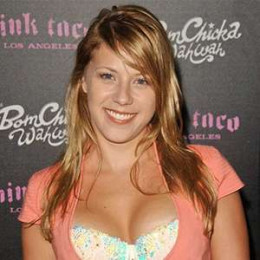 Actress, dancer, singer, Jodie Sweetin was adopted by Sam, a handyman, and Janice, a wedding coordinator. She graduated with a Liberal Arts degree from Chapman University.

In 2011, she appeared in five webisodes of the internet show Can't Get Arrested. In 2012, she appeared as Leia in the TV film Singled Out.

On 15 March 2012, Jodie married Morty Coyle and divorced on 6th September 2016. Their daughter Beatrix was born in 2010. On 22nd January 2016, Sweetin announced her engagement to Justin Hodak, a recovering drug addict.

she married Cody Herpin, a film transportation coordinator on 14th July 2007 divorced on 20th April 2010. The couple has a daughter named Zoie born in 2008.

On 22nd January 2016, Sweetin announced her engagement to Justin Hodak, a recovering drug addict. They are soon to be married.

Jodie Sweetin and Cody Herpin has a daughter named Zoie, born in 2008.

Jodie Sweetin and Morty Coyle are parents to daughter Beatrix, born in 2010.