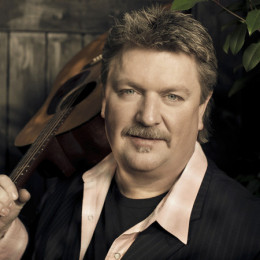 Joe Logan Diffie is a country music singer, best known for his five #1 singles, including "Third Rock from The Sun", "Home", "If the Devil Danced", "Pickup Man" and "Bigger Than the Beatles". In 1998, he won a Grammy Award for Best Country Collaboration with "Same Old Train". In 1997, he received a Humanitarian Award from the Country Radio Broadcasters. He is the son of Joe R., musician who played guitar and banjo.

His first wife Janise Parker was his college sweetheart, with whom he has raised a son Parker and a daughter Kara.

After getting a divorce with his first wife in 1986, he married a nurse technician Debbie Jones with whom he stayed for almost 8 years and raised two sons, Tyler and Drew.

Since 2000, he enjoyed his third marriage with Theresa Trump. With his third wife, he fathered a daughter, Kylie Tarissa in 2004.

The couple divorced in 2017. He married for the fourth time with Tara (Terpening) on 26 May 2018 at the Musicians Hall of Fame.

Joe Logan Diffie was born on 28 December 1958 in Velma-Alma, Oklahoma.

He studied at Cameron University. Some of his singles debuted on the Billboard Hot Country Songs at no. 1 including "Third Rock from the Sun", "Pickup Man", "Home", and "If the Devil Danced (In Empty Pockets)".

She is the first wife of Diffie, whom he married while attending college. They are blessed with a son and a daughter.

She is the second wife of Diffie, who by profession is a nurse technician. They have raised two sons from their marriage.

She is the third and current wife of Diffie, whom he met in a concert, at the Opryland Hotel in Nashville, Tennessee.

He is the first child of Diffie, who was born safe and sound. His date of birth is unknown.

She is the second child of Diffie, who once auditioned for American Idol.

He was born healthy. His current status is unknown.

He was born with Down syndrome and nearly died in 1991 following complications from a tonsillectomy.

She is the youngest child of Diffie, who was born safe and healthy.