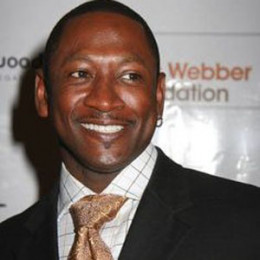 An American actor and comedian, Joe Torry, is currently married to Chrystal Benson. The couple married in 2001. He graduated from Lincoln University with a BA in mass communications. Joe began his acting career at the age of twenty-three .He has a lead role in a movie named Strictly Business and House Party . Joe has guest appearances on television show including ER, NYPD .

Joe Torry is a married person. The couple has three children. His first child is daughter Nevaeh Autumn Torry, a second child is a son Kameron Torry, and third child is a son Joseph Torry II. Joe is a founder of the Giving Back the Love Foundation in 1996.Joe's first comedy movie is ' Why Am I Doing This'. He has appeared in many television series among them The King Assassin Show is his first series.

He currently married to Chrystal Benson. The couple married in 2001.The couple has three children together.

His second child is a son named Kameron Torry.

Her third child is a son named Joseph Torry II.