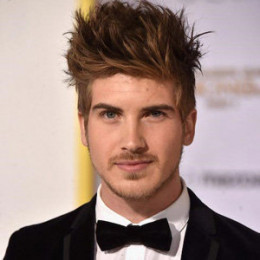 Joey Graceffa is a video blogger who became known for his musical parodies, including the 2012 Hunger Games song "I Wanna Go." In 2014, he won a Streamy Award for Best Actor in a Drama for Storytellers. He is the son of Debbie O'Connor and Joe Graceffa. Graceffa enrolled in Fitchburg State College intending to major in film, but left after one year. He started his Youtube career making videos with Brittany Joyal before the two parted ways in 2012. He released a book in 2015 titled "In Real Life: My Journey to a Pixelated World"; in the book he announced that he was gay.

He is an open gay and has been in love with an internet sensation and Instagram star Daniel Christopher Preda since the early 2014. They first met at an event and then she started following him on Twitter. Then they started connecting through all social medias and finally this relationship took a new way. They are now seen walking together and spending time with one another. They have not given any clues about them getting married.