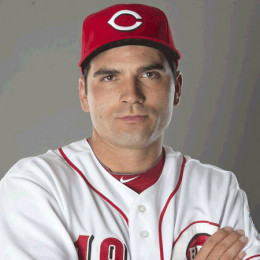 A Canadian professional baseball first baseman for the Cincinnati Reds who holds the title of National League MVP in 2010 for hitting recording 113 RBIs, 37 home runs and batting .324. He started his career in baseball by debuting in a second round of the 2002 MLB amateur draft by the Reds. In 2007 he made MLB debut with the Reds. He has won MLB All-Star and Tip O'Neill Award for four times during his career. For his devotion to a sports career, he has been awarded Lou Marsh Trophy as Canada's athlete of the year 2010. He earned impressive net worth of $50 million from his career. Joey Votto is possibly single at the present.

Exploring his personal life, he has not married yet. Currently, he is in the relationship with his blonde beautiful girlfriend who is also from Canada. Till now there has been no report of any complication in their relationship and she is the only girlfriend he had known so far. It seems like he loves her very much and he may be planning to take their relationship to whole next level. his father died in 2008 at the age of 52. Currently, he resides in Mount Adams, Cincinnati with his mother and three brothers.

Joey Votto was born on September 10, 1983, to Wendy (Howell) and Joseph Votto in Toronto, Ontario. His mother is a sommelier and restaurant manager and father was a chef and a baseball fan. He is Canadian and of Italian descent.

Votto lost his father at the age of 52. He was raised along with his three brothers Tyler Votto, and twin brothers Ryan Votto and Paul Votto in Etobicoke.

From very young age, Votto was a huge fan of popular baseball player Ted Williams. In 1997 he attended Richview Collegiate Institute where he played for the Etobicoke Rangers baseball program. After his high school, he signed a National Letter of Intent to play college baseball for the Coastal Carolina Chanticleers.