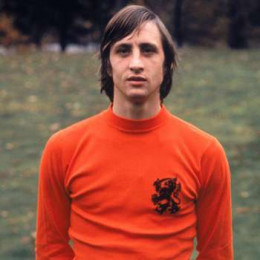 Hendrik Johannes "Johan" Cruyff was popularly known as Johan Cruyff and was a football legend. He was Dutch international football players and was capped for 48 games for his nation. He had prolific international appearances with 33 goals. He also played for big clubs like Ajax, Barcelona, Levante and Feyenoord. After retiring from professional football career, he also went on to manage clubs. He had managerial careers at Ajax, Barcelona and Catalonia. He was honored with awards like Ballon d'Or, FIFA World Cup Golden Ball and many more.

Johan Cruyff was a married man and had almost 5 decades of happy married life. The couple had three children together. Cruyff's son is also a footballer following path trail of his father. Cruyff was a Catalan nationalism supporter and was always dedicated in serving the Catalonia and this also made him hero for Barcelona supporters. He also named his third child after patron saint of Catalonia. Cruyff was a heavy smoker which brought severe complications in his health. He also went through an open heart surgery.

Danny was admirer of Johan both as a player and manager. They had long happy married life and the couple had three children together.

Chantal is the first child to Johan Cruyff and Danny Coster. She grew up responsible and sweet heart to her parents.

Susila is the second child as well as the second daughter to Johan and Danny. She is only two year younger than Chantal.

Jordi is the youngest child to Johan and Danny. He was named after the patron saint of Catalonia, Saint George. Jordi is also a professional footballer.