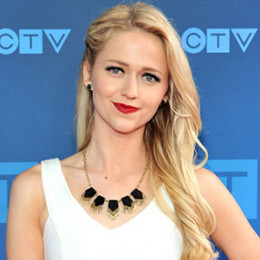 An American actress, Johanna Braddy, is currently married to Freddie Stroma, an English actor, and model, since 2016. She was born to Jo Beth, a preschool music teacher, a vocalist, and an engineer. Johanna is known for playing the lead role in the 2009 horror film, "The Grudge 3". She made her screen acting debut in the ABC Family television film "Pop Rocks", playing Olivia Harden and made voice acting debut in "Avatar: The Last Airbender" as Princess Yue.

Johanna Braddy also played small parts in films "Broken Bridges", "Home of the Giants" and "Whore". On television, she had recurring roles in the FX drama "The Riches", ABC Family teen comedy-drama, "Greek", and VH1 soap "Hit the Floor". Braddy was also a guest star on "Cold Case, Southland", "CSI: Crime Scene Investigation", "Suburgatory", and "Shameless". She was previously married to Josh Blaylock. After the divorce with him, she married Freddie Stroma.

Braddy got married to her co-star from Video Game High School, Josh Blaylock, and they divorced in 2014.

Freddie Stroma is an English actor and model, mostly known for his work in Harry Potter series as Cedric. The couple married in May, 2016.