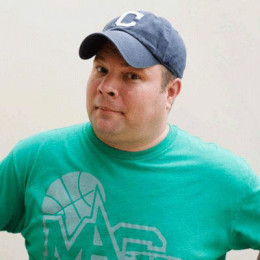 Born in Ohio, John Caparulo is an American stand up comedian. He spent his childhood near Pennsylvania and West Virginia borders. After graduating from Kent State University, John started stand-up comedy in night clubs. His comedic shows mostly covers every day life and he drives his inspiration from the famous sit-com The Simpsons and Richard Pyor. His friends, family and fans know him as "Cap".

John Caparulo is married to Jamie Marie (Kelly) Caparulo. They both are alumnis of Kent State University. John announced his engagement to Jamie after a show at Comedy & Magic Club on November 4th, 2010. And the couple got married near their alma mater - Kent State at Water Street Travern on 27th May, 2012. The couple have two dogs - a Basset Hound and a Puggle. They live in Calabass, California.