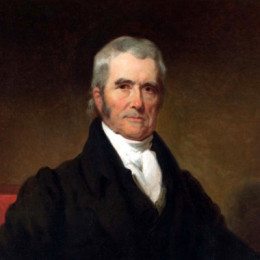 John Marshall was the fourth Chief Justice of the Supreme Court of the United States. The longest-serving Chief Justice and the fourth longest-serving justice in U.S. Supreme Court history, Marshall dominated the Court for over three decades and played a significant role in the development of the American legal system. In 1823, Marshall became the first president of the Richmond branch of the American Colonization Society, which was dedicated to resettling freed American slaves in Liberia, on the West coast of Africa.

John was a married man. He was married for only one time throughout his life. As he was not involved in any sorts of multiple marital affairs and relationship, we can conclude that he was happily married. There is no more news regarding his children and family life. Marshall was also the last surviving Cabinet member from the John Adams administration. Two days before his death, Marshall enjoined his friends to place only a plain slab over his and his wife's graves and wrote the simple inscription himself.

John Marshall was born on September 24, 1755, in Fauquier County, Virginia. His parents were Thomas Marshall and Mary Marshall. He had 14 siblings who grew up together in Virginia's northwestern frontier.

During his early years, Marshall received almost no formal schooling and was educated by his father at home, who taught him basic mathematics, history, and English literature. Moreover, he taught Marshall practical lessons about politics and kept him informed about the events of the time.

John Marshall was the last chief justice born a British subject prior to the American Revolutionary War. Before becoming chief justice, Marshall had been a leader of the Federalist Party in Virginia and served in the United States House of Representatives from 1799 to 1800. He was also secretary of state under President John Adams from 1800 to 1801.

Marshall married Mary Willis "Polly" Ambler (1767–1831) on 3rd January 1783. The wedding took place in the home of her cousin, John Ambler. The couple shared 10 children, but only six of them made it to adulthood.

In 1831, Marshall traveled to Philadelphia, Pennsylvania, where he underwent an operation to remove bladder stones. The same year in December, his wife Polly died in Richmond. Four years later, in June 1835, Marshall again traveled to Philadelphia for medical treatment, where he passed away on July 6 at the age of 79. He had served as Chief Justice for over 34 years.

The Liberty Bell was rung following his death. There's a widespread story that claims this was the final time the bell rung after which it cracked, never to be rung again.

Marshall's body was returned to Richmond and buried next to Polly's in Shockoe Hill Cemetery. As per his own wish, the inscription on his tombstone read:

Marshall was among the last remaining Founding Fathers and was also the last surviving Cabinet member from the John Adams administration.

John Marshall must have made a fortune back in the day, However, the exact figure of his net worth was not revealed to public knowledge. His source of income included his career as a Chief Justice of the Supreme Court where he served for nearly four decades.

He was married to his wife Mary throughout his life. The couple had traveled together many beautiful places of the world. Also the couple had 10 children together.

He is the first son to this family.

The couple was blessed with this beautiful daughter.

They welcomed this beautiful daughter as the second daughter to this family.

She is the third daughter to this family.

The couple were blessed with this son as the second son to this family.

She is the fourth daughter blessed to this couple.

The couple were blessed with this son as John Marshall

He is the fourth son to take birth to this family.

As the ninth child to this family, Charles is the fifth son.

For the last time the couple gave birth to this son.