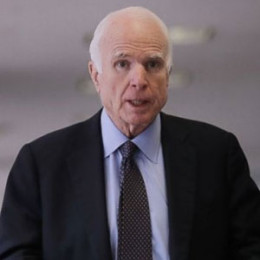 John McCain is a military hero turned politician who is now a well-established man, after a lot of struggle. He is a current senior United States Senator from Arizona. McCain is living a blissful married life with his wife and children. His personal life is as perfect as him and his career.

John McCain was born as John Sidney McCain III on August 29, 1936, at Coco Solo Naval Air Station in the Panama Canal Zone. He is the oldest son of naval officer John S. McCain Jr. and Roberta McCain. He grew up with his younger brother Joe and elder sister Sandy.

John started his career as a military agent. He was commissioned an ensign hence beginning his work and took two and a half year of training at Pensacola to become a naval aviator. He served as a pilot and officer in the Navy for almost 22 years. In 1967 he was imprisoned by Vietnamese when he was shot over Hanoi during Vietnam War.

In 1982 McCain was elected to Congress followed by U.S senator from Arizona in 1986. He stood as one of the strong opponents to the frontrunner, Governor George W. Bush for the Republican presidential nomination, 2000. He along with Sarah Palin lost the United States Presidental election against Barack Obama in 2008. McCain’s book Faith of My Fathers regarding his family’s military history was released in 1999. In 2015 John McCain was chosen as the chairman of the Senate Armed Services Committee.

McCain’s first wife Carol Shepp was a model from Philadelphia. They married on July 3, 1965. He has a daughter from Carol named Sydney born in 1966. He also adopted Shepp’s two daughters Dough and Andy Shepp, from her previous marriage. The duo eventually split up after several years of their marriage.

On May 17, 1980, John married his second wife Cindy  Hensley. Cindy is a teacher from Phoenix. They met in 1979 in Hawaii when Hensley was on vacation with her parents. The duo is blessed with four children namely Meghan, John IV, James, and Bridget. Bridget is the adopted child of McCain.

McCain was diagnosed with skin cancer when he was 64-year-old. He went through a successful surgery. He also underwent prostrate surgery for enlarged prostate in 2001.

On July 14, 2017, he suffered a brain tumor and had to remove a blood clot from above his left eye.

Politician John McCain holds the staggering net worth of $21 million. He certainly earns a lucrative amount of salary from his career. He receives $11,000 annually from Navy. He received an annual salary of $25,000 with $25,0000 bonus while working for Hensley.

McCain received $112,000 in political contributions from Charles Keating Jr. and his associates. His annual salary in 2007, as a senator was $165,000. His earning from book sales was $1.7 million, which he donated to charity.

Carol Shepp is a model from Philadelphia. She is the ex-wife of John Mccain. They eventually divorced after several years of their marriage.

Cindy Hensley is a second and current wife of McCain. It was a love at first sight when the duo met each other.

Sydney is the first daughter of McCain from his ex-wife Carol. She was born in 1966.

Dough is the step daughter of Mccain from his ex-wife Carol's previous marriage. The father and the daughter were in good terms.

Andy Shepp is another daughter of Carol Shepp from her previous marriage. She is also the step daughter of John.

Meghan was born in 1984. she is the first child of McCain from his current wife Cindy.

John IV was born in 1986. He is the second child and first son of McCain from his wife Cindy.

James is the second son of McCain from his wife Cindy. He was born in 1986 and known by his nickname Jack.

Bridget is the adoptive child of McCain and Cindy. She was born in 1991 in Bangladesh whereas adopted in 1993.