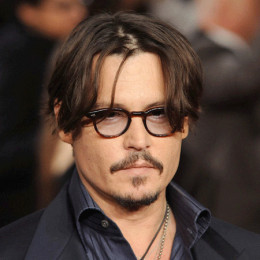 Johnny Depp is an actor, producer, director, and musician. He has won a Golden Globe Award and Screen Actors Guild Award. He is known for his notable appearance in several movies. He earned popularity after portraying Captain Jack in the movie, The Pirates of the Caribbean and its sequels.

Depp was born on June 9, 1963, in Owensboro, Kentucky, U.S. He is the youngest son of Betty Sue Palmer and John Christopher Depp. Nationality-wise, he is an American and belongs to mixed ethnicity. He is of mostly English ancestry with some European ancestry.

Depp’s mother was a waitress, and his father was a civil engineer. He is descended from a French Huguenot immigrant, Pierre Deppe or Dieppe who lived in Virginia around 1700.

Depp moved to several places during his childhood days. He moved to 20 different places along with his family. His parents divorced when he was 15. His mother married Robert Palmer. He cites his stepfather as a source of inspiration to him.

At the age of 12, Depp started playing with various garage bands after he was gifted a guitar from his mother. He dropped out of the high school to be a rock musician, as it was his dream from the early age. He was suggested by his principal to follow his dream to be a musician.

Depp started his career in music as a front-man for the music-garage bands named 'The Kids'. He also collaborated with the band, Rock City Angels and co-wrote their song named Mary.

Depp debuted in the film industry in 1984. He played the role of Glen Lantz in the horror movie, A Nightmare on Elm Street (1984).

In 2003, Depp portrayed Captain Jack Sparrow in the Walt Disney’s adventure movie, Pirates of the Caribbean: The Curse of the Black Pearl.  He played the same character in its sequels. The films became one of his successful films.

Depp’s other movie credits include Alice in Wonderland, Charlie and the Chocolate Factory, Blow, and The Tourist, which also became commercially successful. He has been listed in 2012 Guinness World Records as a highest paid actor.

Depp was voted as Sexiest Male Movie Star of All Time by Empire's magazine (UK). It's no wonder for girls falling in love with him. He has already dated more than two dozen of celebrities. And talking about his personal life he was married twice.

Depp tied the knot with a makeup artist, Lori Anne Allison on December 20, 1983. He was just 20 years old at the time. In order to support his family, he used to be a ball-pen salesman. He landed to film industry because of her friend Nicolas Cage.

Later, Depp was engaged to actresses, Jennifer Grey and Sherilyn Fenn in the late 1980s. He dated actress Winona Ryder whom he proposed in 1990. He tattooed “WINONA FOREVER” on his right arm. He was in a relationship with Kate Moss in 1994. They had a relationship for four years.

Depp started dating actor and model, Amber Heard in 2011. They met on the set of The Rum Diary. The couple was married in February 2015 in a private ceremony at their home in Los Angeles.

On May 23, 2016, Amber filed for divorce and obtained a temporary restraining order against Depp after five days. A settlement with Amber to received $7 million was announced on August 16, 2016.The divorce was finalized on January 13, 2017.

Depp has made a huge amount of money through his successful movies. He has the net worth of $200 million.

She was his first wife and they got married when he was just 20 years old. By her friend named actor Nicolas Cage he was able to debut in film industry. Reason behind their divorce has not been disclosed yet.

They first met each other on the set of "The rum diary" from where they started to have an affair with each other. After dating few years they tied in knot in marriage ceremony which was held in his own private island named Little Hall's Pond Cay. Till now she has not given birth to any children.

They were said to be having affair since 2009 after they worked in same movie named "The rum diary". Their marriage was performed in his private island in Bahamas. Till now she has not given birth to any children.

She is very pretty. She suffered from E. coli infection when she was child and recovered back.