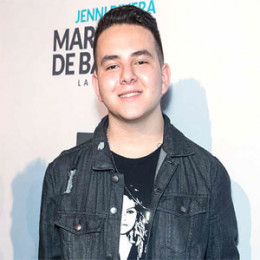 Seventeen years old, Johnny Lopez is an actor, best known for his role in reality television series "I Love Jenni", "Crooked Stilo: Egoista", and "The Riveras". He is the youngest son of Mexican-American singer Jenny Rivera. He has also become a social media superstar with more than 310K followers on Instagram.

Last year in December, Johnny came out of the closet and confirmed that he's gay. He's been dating his partner Joaquin Navarro since a long time.

Johnny Lopez was born in the United States in 2001. He is the son of Mexican-American singer Jenny Dolores Rivera who was named as Best Selling Latin Artist of 2013. His father Juan Lopez was politician and attorney. Both of his parents died when he was young. His mother died at the age of 48 in a plane crash and his father died in jail.

Lopez is an American by nationality and his ethnicity is white. Concerning his educational background, he's graduated from his high school.

Despite being the legacy of the famous singer, Jenny Rivera, Johnny Lopez has been able to keep a name and fame in Hollywood. Lopez has starred in three television reality shows, I love Jenni, Crooked Stilo: Egoista, The Riveras.

Being a son of well-known singer, he is living a luxurious life. He is very secretive about his earning and salary. But we can assume that his net worth is in six-digit-figures. His exact net worth, however, is still under review.

According to the sources, the salary of characters of the reality shows The Riveras is range from $39K-$43K. So we can estimate his earning is around $40k per year.

Lopez is in a relationship with his longtime partner Joaquin Navarro. In a video that he posted on Instagram, he addressed rumors surrounding his sexual orientation. The duo accept their relationship when their pictures went viral on various social media.

In one interview Lopez shared about his secret affair with Joaquin and stated:

"Joaquin and he have been a pair for two years. People began noticing that we were together. I am in a gay relationship right now and I am in love with this person. I've been dealing with this part of myself for a long time."

Also, on Instagram Lopez posted a photo with his boyfriend with the caption "Thankful". Also, he disclosed that he has been in a relationship with Joaquin Navarro for two years. Where he wrote,

"Two years ago today I officially met this boy and realized I had fallen for him. I'm so grateful that along the way I was able to find the courage to tell the world about him and that I don't have to hide him anymore. Our journey has been difficult one but I wouldn’t change a thing about it."