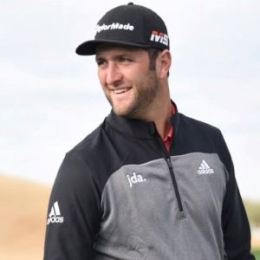 John Rahm is a young golfer who currently stands at number eleven in world rankings. He started playing golf from college and started professionally playing from 2016. He is currently competing in ANDALUCIA MASTERS tournament.

Is Jon Rahm Engaged? Know more about his Relationship Status, His Girlfriend, Wedding, and Personal Life

Jon Rahm is engaged to his girlfriend Kelley Cahill since June 2018. Kelley is also a sportsperson and competed in javelin for Arizona State. They first met in college and soon started dating. Before engagement, the couple was in a live-in relationship for two years. 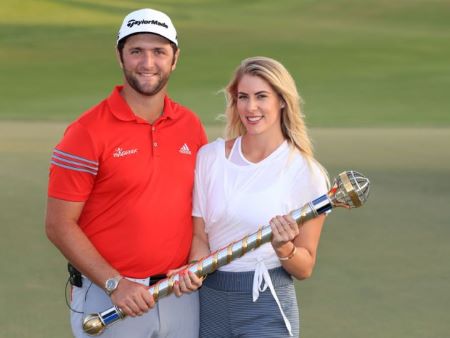 Jon discussed the engagement in an interview and stated he was not nervous before engagement and proposed with the ring he designed. He added;

“I knew what I wanted. I designed what’s around the ring. It’s supposed to look like a crown and an engraving inside. I had a big part in it. It wasn’t exactly what she wanted, but she loves it. It’s a little more personal like that.”

He also discussed the wedding plans and stated the following:

“There is [a date we have in mind], but we’re trying to take it slow and keep it pretty small, to be honest. We’re really thinking of doing a small ceremony in Spain just because a lot of my family members can’t fly all the way to the U.S. and vice versa, where a lot of her family members can’t go all the way to Spain. So, we’re thinking we’ll do something small in Spain and then a couple of months later do a ceremony in the U.S.”

The couple is enjoying their engagement and spends a lot of time together. Moreover, Kelley often joins him in tournaments and tours and is seen cheering for him.

What is Jon Rahm's Net-worth? Know more about his Salary, Earnings, and Wealth.

Jon Rahm's overall net-worth is $3 million. He earned this wealth by playing as an amateur golfer and professional golfer. He started playing golf at his college and won eleven tournaments. He earned $750 per tournament as per The United States Golf Association (USGA) rules.

Wanted to pull up in style today and #MBCollection delivered! They picked out the perfect ride for me. @mercedesbenzusa #MBambassador #MBUSACollection #GLS550

Rahm started playing professionally from 2016 and competes on the Professional Golfers' Association (PGA) Tour. On average, a golfer can win $628,079 from the tour. However, a player can earn up to $6,683,214 based on the performance.

The young Rahm is not only doing great in golf field but also in business market deals. He is a brand ambassador for Mercedes-Benz and currently owns a Mercedes-AMG G 63, which costs on average $142,800. Rahm is also sponsored by TaylorMade Golf, Adidas, Rolex, JDA Software and Bighorn Golf Club.

After encouragement from his father, Jon moved to the USA to attend college and pursue golf. He joined Arizona State University and started playing as an amateur golfer. From 2016, he started playing golf professionally and currently stands at 11 in world rankings.