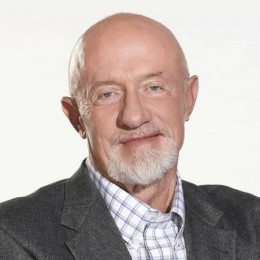 An American actor who is widely popular foe his role as Mike on Breaking Bad TV series. Airplane, 48 Hrs., and Beverly Hills Cop are some of his movie which helped him to gain more fame. He is son to Elena (Adams) Banks who used to work for CIA. He attended Indiana University Bloomington. He was also the classmate of Kevin Kline, who is also an actor in same university. Later he dropped out of university and join a touring company as a stage manager in order to pursue his career in acting. It is said that he used to teach drama to California prison inmates. In 1970's he really started to act in TV series and commercials. For his talents he has been awarded with Saturn Awards and Critics' Choice Television Awards.

Talking about his personal life he has already married not once but twice. There was a rumor that he has married thrice and the information still exists on his biography that is on IMDB, but it has not yet been proven. After his second marriage, there has been no report of him having affair with anyone. He is a father of three children consisting one son and two daughters.

American actor, Jonathan Ray Banks was born on January 31, 1947, in Washington, D.C., U.S. His mother, Elena (Adams) Banks was a professor at Indian State University and worked for the CIA.

Banks joined the Indiana University Bloomington and met actor Kevin Kline and since then they are good of friends. They both participated in a production of The Threepenny Opera.

Later, he dropped out the college in order to join a touring company of Hair as a stage manager. Even, he toured Australia with the company.

Jonathan began his career as a stage performer before worked on television. His first notable role was as Vince Gentry in an episode of the 1976 TV film Barnaby Jones. That same year, he appeared as Woodward in The Macahans.

He made his first movie debut with Coming Home, in which he played a minor role. In 1978 he got his big break in television with the series Wiseguy portraying the character of  Frank McPike for four years.

In 1981, he appeared as Dutch Schultz on the NBC series the Gangster Chronicles. Since then, he has starred in numerous movies and TV films. From 2009 to 2012, Banks worked in the series Breaking Bad, for which he won the Saturn Awards for Best Supporting Actor on Television.

Banks was also nominated for other several awards. Since 2015, he has reprised the role in Breaking Bad spin-off, Better Call Saul. In 2015 he won the Critics’ Choice Television Awards for his role in Better Call Saul. He currently voices the character Eruptor in the TV series Skylanders Academy since 2015.

Banks is a married man, he ties a knot with Gennera Banks in 1990 and still, they are together. The duo shared three children; Rebecca Elena Banks, Claudio Jon Henry Banks, and Joanna Rae Banks-Morgan.

Prior marrying, Gennera, Jonathan was in a marital relationship with Marnie Fausch. The duo married on September 1968 but the couple couldn't handle their relationship and had divorced after two years of marriage in 1970.

Jonathan has earned a quite name and fame from his acting career as he succeeds to maintain the net worth of $2.5 million.

She is his first wife. They got divorced due to some personal reason which they have not disclosed yet.

It has already been more than two decade of their marriage relationship. They are living happily with their three children.

She is the first daughter from his first wife. She has already married.

He has one twin sister. He was born from his second wife.

She is twin of Claudio. Her picture along with family can be found in different sites.