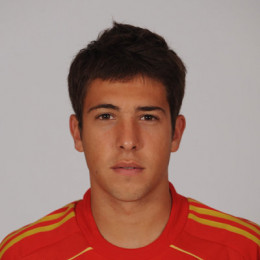 Jordi Alba born as Jordi Alba Ramos to Spanish parents Miguel Jose and Maria Jose. His nickname is "alba" and "El Nino". He has an older brother named David Alba. He began his football career at the age of seven with Hospitalet and at the age of nine, he joined with Barcelona youth FC for the next seven years after that. However, he honed his skills with Valencia. He was part of Spain National Football Team and represented his country in 2014 FIFA World Cup.

Jordi Alba is currently dating Sara Molto since 2014. He has an ex-girlfriend named Melissa Morales, they were in a relationship for 3 years, after which Morales claimed to have ended the relationship due to each other's temper and jealousy. There aren't any plans of Jordi Alba settling down anytime soon for he still has good games ahead of him and a bright future in the world of football.

Jordi Alba was born on Jordi Alba Ramos was born on 21 March 1989 in L'Hospitalet, Spain. He is Spanish and belongs to the Caucasian ethnicity.