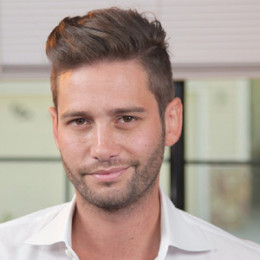 American television personality, Josh Flagg earned fame from the show, Million Dollar Listing Los Angeles which was telecast on the Bravo television network. He is a well-known real estate agent and author too, so far published two books; A Simple Girl: Stories My Grandmother Told Me and Million Dollar Agent: Brokering the Dream. Flagg is openly gay, and on September 2017 he married his partner Bobby Boyd.

Josh Flagg was born as Joshua Daniel Flagg on August 20, 1985, in Los Angeles, California to Michael and Cindy Flagg. Concerning his nationality, he is an American and belongs to the mixed ethnicity. He grew up in the wealthy American family.

Flagg is the grandson of Herman Platt, a Jewish leader, philanthropist and electronics industry, executive and great-grandson of Benjamin Platt.

He went to Brentwood School, a private school in the Brentwood section of Los Angeles. In 2003, he left Brentwood and joined Beverly Hills High School, where he graduated the following year.

At the age of eighteen, Flagg started working as a real estate agent. He pursued his career as a talented real estate broker and served for Coldwell Banker East Office. During that time, Flagg made various records including Beverley Hills sale & the Brentwood Park, which is the highest sale in the history.

Throughout his real estate career, he has sold properties to several celebrities including Steve Aoki & Adam Levine. And in 2012, Flagg was featured on Forbes’ “30 under 30” as the top record-breaking real estate agent.

As a television star, Flagg along with other two agents, Madison Hildebran & Chad Rogers starred in a reality show, “Million Dollar Listing,” which telecasted by channel Bravo.

Besides these, Flagg is also a writer. He published his first book titled- A Simple Girl: Stories My Grandmother Told Me in 2009. In 2011, he published an autobiography- Million Dollar Agent: Brokering the Dream in 2011. The book depicts his personal life starting from his childhood to becoming one of the top real estate agents.

Josh Flagg reportedly came out as gay while he was leading stars of the Million Dollar Listing. He coming out of the closet as gay didn't come as a shock because he was earlier seen with his boyfriend- Colton Thorn on multiple occasions.

However, he officially came out on one of the episodes of Million Dollar Listing. Although Flagg dated Colton Thorn for almost a decade, they broke up recently after which he found new love in Bobby Boyd.

They have known each other from an extended period, although, recently they confirmed their relationship and exchanged vows in a Jewish wedding at the Beverly Hills Hotel in California on September 9, 2017.

Their wedding was considered as the most expensive wedding, and the guest list included some celebrities as well.

Following his career to his rise with the popular TV show, Flagg managed to gain a lot as his net worth value. As of now, 2017 his current net worth is around $8 million.

Bobby is known as the life partner of Josh Flagg. The duo exchanged vows in an extravagant floral ceremony.