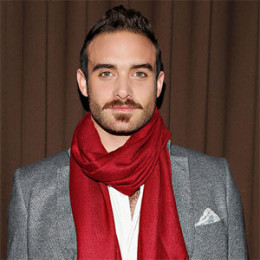 British actor, Joshua Sasse is the son of Mary Rosalind (Macauley) and Dominic Sasse, a poet. He studied performing arts at Hurtwood House College and later at Cygnet Training Theatre in Exeter. His debut major role was in 2010, in the British gangster film, "The Big I Am." He won the main role of Galavant in ABC's series "Galavant" in May 2014 and was first premiered on 4 January 2015. In March 2012, he was cast in a big budget horror film titled "Frankenstein's Army."

Joshua Sasse is parents to a son named Sebastian with his former partner Francesca Cini, an Italian socialite. On 20 February 2016, Sasse engaged to Australian singer and his Galavant co-star Kylie Minogue. It was announced in the "Forthcoming Marriages" section of The Daily Telegraph. In February 2017, Minogue called off her engagement to Joshua Sasse. She confirmed the rumor through her 1.5 million Instagram account.

The popular artist ‘Joshua Sasse’ was born on 9th December 1987 in Westminster, England. He is the son of Mary Rosalinda and poet Dominic Sasse and also has a sister (Lydia Sasse).

He was raised in a catholic family who belongs to the white ethnicity and holds British nationality. He is best known for his role on ‘Galavant’.

At the age of 5, he lost his father though his mother subsequently remarried. Joshua was sent to ‘Shrewsbury School’ where he discovered his real talent and that is love for acting.

Joshua Sasse debut in movies through British gangster film ‘The Big I Am’ (2010). After that, he appeared in several movies and TV series such as; ‘Frankenstein’s Army’, ‘Rouge’, ‘Galavant’, ‘The Neighbours’ and much more.

In December 2013, he was cast in a ‘Galavant’ a fairy tale-themed musical comedy which was aired on ABC. Though he has done various movies and series but ‘Galavant’ is the one which gave him a real taste of success.

Galavant was considered as the huge success of 2013. Later, in 2016 it came up with its second installment and the lead role was again played by ‘Joshua Sasse’.

The 29-year-old actor was previously married to ‘Francesca Cini’; the duo has a son named ‘Sebastian Sasse’. After his unsuccessful married life, he was involved with Australian singer ‘Kylie Minogue’. On February 2016, Joshua engaged his girlfriend but their relationship doesn’t last long and in February 2017, they confirmed that they were no more together.

According to the source, the real reason behind their separation was involvement of another girl in Joshua life and that girl is none other than Spanish actress Marta Milans who is his co-star from ‘No Tomorrow’.

Joshua Sasse is strongly stood high with 6 ft height. His net worth is also amazing like his performance with total $2 million dollars which has helped him to be on the list of millionaires.

Joshua Sasse with his former partner Francesca Cini, an Italian socialite are parents to a son named Sebastian.