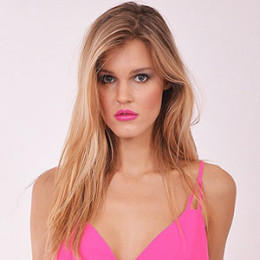 Joy Corrigan is a model and actress best known for her Instagram popularity.Her dream is to one day become Victoria's Secret model. She is comfortable in both fashion and glamor. Joy modeled for brands including Argento Beachwear and Liliana Montoya. She is well known for appearances in elite publications like Sports Illustrated, GQ, and Galore Magazine.

She has six brothers and three sisters. At the age of fourteen, she met an unknown person who offered her a modeling contract. Joy has 490,000 followers on her Instagram account.

She entered the International Modeling world when she first signed with The Fashion Agency in Milan, Italy in June.

Joy worked really hard to get a spot in the 2016 Sports Illustrated Swimsuit issue but did not make the cut. She is signed model to Next Model Management.

Joy also featured on Fashion TV and in an episode of the hit TV show called ' Burn Notice.' Apart from that, she is a member of the American Cancer Society against Breast Cancer and Relay For Life.

She stripped to tiny two-piece as she embarked on a sizzling beach photo shoot in Miami, Florida on 1st May 2017.

Corrigan loves doing photo shoots and posts a lot of photos on social media. But when comes to her affairs and dating life, she has maintained a low profile.

With her beauty and hot body, she can make any guy go crazy about her. But for now, she is not ready to share her relationship status with the world so it can be assumed that she is single.

Joy has done modeling for various well-known brands and featured in many famous magazines. She must have earned a good sum from those and maybe has a huge net worth.