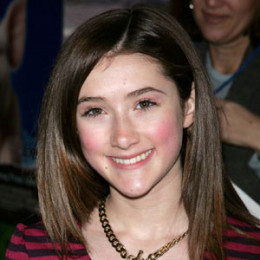 Julianna Rose Mauriello, better known as Julianna Rose is an American actress and dancer recognized for her role as Stephanie in Lazy Town. She is a well-trained dancer and knows ballet, jazz dance, quilt dance, Irish dance, and gymnastics.

Born on 26th May 1991, Julianna Rose grew up in the city of Irvington, New York, USA along with her sister, Alex Mauriello. She was interested in dancing and acting from early days.

She attended Middlebury College and later joined the Professional Performing Arts School in NYC where she studied different forms of dancing including ballet, jazz, tumbling and Irish step dancing. She trained with Janine Molinari and Rona Leslie.

Julianna started her acting career in the ballet The Nutcracker. Then she featured in the musicals Carousel and in The Wiz. She also made an appearance in the Broadway- Musical Oklahoma! , and has worked in the musical Gypsy: A Musical Fable and in A Tree Grows in Brooklyn.

In 2002, she made Hollywood debut from The Young and the Restless. She rose to fame from an Icelandic-British-American TV series LazyTown, where she has portrayed the character of Stephanie.

It was one of the popular children’s television series which has over 78 episodes in 4 seasons. For her great performances in the children series, she was nominated for the Daytime Emmy Awards in 2006 as an outstanding actress.

Apart from an acting career, she has played in some of the commercials and done some voice-over.

Julianna is dating her boyfriend, though the name of her boyfriend is still secret and has not revealed in media. But we can see the pair's photo on her Instagram account.

She is equally managing her time for personal stuff and her career. She is a fan of U2 and likes The Simpsons. Besides that, Mauriello claims to be a purse lover and has more than 60 purse and handbags.

Julianna Rose's Net Worth How Much Is Her Earnings?

Julianna Rose is one of the young American actresses who has got a bright future ahead. Till now she has estimated net worth of $2 million.

Julianna Rose Mauriello on the Tony Danza Show, check out the video,