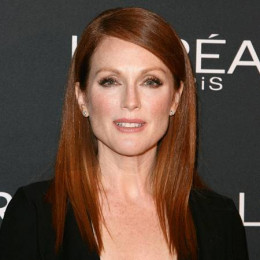 Julianne Moore is a popular American actress and author of children's book, who is widely recognized for her role in movies such as Far from Heaven,Boogie Nights and The Lost World: Jurassic Park. She was born to Peter Moore Smith and Anne Smith. Her mother died in 2009. She attended Frankfurt American High School. In an interview, she told that she was a good student and when she was young she wanted to be a doctor. After she finished graduation she shortly worked as a waitress. In 1983 she started her career in acting by working in off-Broadway theaters. Besides movies, she has also appeared in TV series of the fourth season of 30 Rock. For her hard work in the acting career, she has already been recognized with five Academy Award nominations, eight Golden Globe nominations, which are some of her honorable achievements.

Concerning Julianne Moore's personal information, she has already been married. she has been married twice. After dating for two years she married her first husband but her relationship with her first husband didn't last long and they got divorced. After some time of her divorce she dated her lover, who was also a director of some of the movies she starred. Their marriage took place in Greenwich Village neighborhood of Lower Manhattan. Together they are parents of two children.

He was her first husband. They got divorced after they thought it was too early to be married.

Professionally he is a director and she has starred in some of the movies he directed. Together they are parents of a son and a daughter.

He is the eldest son from her second husband. He is very handsome.

She is the second child of the family. Her picture along with family can be found in internet.