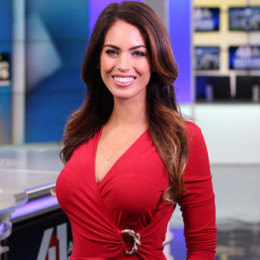 Famously known as a news reporter, Kacie McDonnell is working for NESN news network since 2016. She is also known for her works in Kansas City and Sporting KC. The American reporter is also famous for dating the famous professional baseball player Eric Hosmer.  Besides that, she was also crowned as Miss Teen Pennsylvania International in 2008.

What is the relationship status of Kacie McDonnell? Is she dating someone? Know about her Personal Life;

Kacie McDonnell is currently dating the American professional baseball player Eric Hosmer. The duo started dating in early 2015 but their relationship came to the public after Eric posted a kissing picture with Kacie on his Instagram.

5th spring training winding down — 4th annual visit to maybe my favorite restaurant ever. Can confirm he’s my favorite person though. Aside.. My mom’s internal monologue when she sees what I’m wearing compared to Eric: “where is she going in that 4th of July outfit???” —- it was the only blue I brought and we all know yesterday was game day. \\//

The couple, however, broke up in the same year regarding their personal issues and reunited from the year 2017. The Philly girl and her spouse-to-be aren't in a rush to walk down the aisle. But, assuming the chemistry between two they'll make it true soon.

Despite being in a live-in together relationship for years, the pair doesn't have any children but she call herself "cat mommy". As of May 2020, the FOX News anchor is enjoying her quarantine life with partner Eric Hosmer.

Kacie and Eric are so in love with one another that they never miss sharing the moment spent together on socials nor they lag behind showing the affection to their partners.

On March 25, 2020 Kacie revealed her quarantine routine, how she's spending days doing makeups, workouts. The 29-year-old even shared how she manages social distancing with her beau. McDonnell and her MLB star lover currently resides in California with no rumors of separation.

The couple often spotted in many events together. Moreover, they are open about their relationship and do not hesitate to share their romantic pictures in their respective social sites. The pair share a good bond and there will be no wonder if they soon share the wedding vows together.

Kacie was previously in a dating relationship with many men.  She first dated the former American football quarterback Christain Ponder. The pair shared a good bond initially, however, after some months of dating they faced some highs and lows in their relationship and separated.

McDonnell then dated Jonathan Pettibone who is a Philadelphia Phillies pitcher. They started dating from 2013 and were spotted in many events and venues including Chase Utley's All-Star Animals Casino Night. Just like her previous relationship, she broke up with Jonathan after several months.

As the third relationship, she started dating American football quarterback Aaron Murray. The couple dated for several months and finally engaged in October of 2014. The pair were about to share the wedding vows, but unfortunately, they decided to part their ways with mutual understanding in 2015.

What is the Networth of Kacie McDonnell?

Kacie McDonnell holds an estimated net worth of $300,000. There is no wonder for her to garner that much fortune as she is the well-established news anchor and reporter. Moreover, the average salary of a news reporter is $39,846 per year.

The 28-year-old reporter is currently working for NESN in Boston as a full-timer. Besides, she previously worked some famous franchizes like NBC 41 in Kansas City as a reporter and as a pre/post game host and sideline reporter for Sporting KC.

On the other hand, her boyfriend Eric Hosmer holds an estimated net worth of $2 million. He is a 4 times Gold Glove Award winner American baseball player and garnered that good fortune from his career.

Be sure to check out Marrieddwiki.com for more biographies.