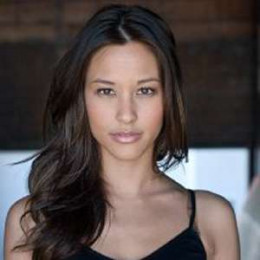 Kaitlyn Wong is a Canadian actress of a Chinese and Irish decent. Her mother was a former model. Wong completed her degree in Psychology from the New York University. Before starting her career as an actress, she used to work as a model in ad campaigns for FUZE fruit drinks, and RBC for 2010 TIFF. Kaitlyn is also a winner of Miss CHIN Bikini Pageant and is planning to establish her own modeling agency.

Kaitlyn Wong was born on June 18, 1988, in North York Toronto, Canada. Her mother is a former model which inspired her tp pursue modelling career. She graduated in Psychology.

Wong started her modelling career as a print model in ad campaigns and billboards. She made her acting debut in Beautiful People in a minor role. Then she appeared in number of movies and TV series including Blue Mountain State, Aaron Stone, and Locked Down.

Kaitlyn Wong is happily married to Ted Leeb since August 2013. The duo shares a daughter named Avery Elizabeth Leeb who was born on 2016. She has 39.2k+ followers on her Instagram.

Though Wong and her husband prefers to keep their personal life behind the bars, they manage to share some family moments with fans via social media. Have a look at Wong's Instagram post of 5th January 2019:

Wong has an estimated net worth of $2 million which she accumulated from her acting career. She stands at a height of 5 feet 4 inches tall. As of 2019, she is 30 years old.

She got married to Ted Leeb on 17 August 2013. They do not have any children yet. As of now, there are no signs of their separation.