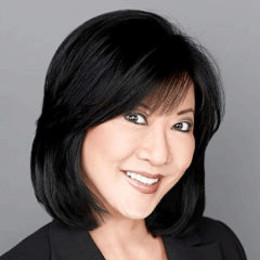 A Chinese-born American broadcast journalist Kaity Tong who is working as a news anchor in New York City for more than three and a half decade. When she was just four years old she migrated to the United States with her family. She is a daughter to George and Anita Tong. To be a journalist she was greatly inspired by her great-uncle who was former US ambassador from China. She attended Bryn Mawr College where she graduated with honors in a bachelor of arts degree. She started her career at broadcasting by working as an editor and producer for KPIX-TV All-News Radio. She has also starred in the role of reported in various movies like Marci X and Night Falls on Manhattan. For her incredible talent, she was honored with the Paul Harris Fellowship from Rotary International..

In 2010 she was involved in controversy after her director at WPIX tried to get rid of her by bad review and pay cuts because of her old age. She filed a case against them and later she won the case.

She is a married woman. She has one son named Philip Long from her first marriage with Robert Long. Her first marriage was unsuccessful and after some years of her divorce, she married her lover Patrick Callahan with whom she is living happily till date. She has no children from her second marriage.

She returned on the desk on WPIX after a six-month medical leave. She was in and out of the hospital and ended up having colon surgery.

Our @kaitytong made her return to anchor the 5 p.m. and 10 p.m. weekend newscasts for PIX11. Kaity shared a heartfelt message with our viewers.

She said in a welcome back video,

"I want to thank you all for all your support. It really got me through a really tough time."

As she recovered from the illness, she lost 17 pounds and had a series of surgeries. She posted images during the time period on Facebook:

She is healthy and happy at present.

Kaity Tong was born on 23 July 1947 in Quindao, China. She studied at Bryn Mawr College with an academic scholarship.

She accepted to the doctoral program of Stanford University.

Professionally he is news director and a vice-president at KNBC-TV. The couple have given birth to one son.

He is a photographer. The couple haven't given birth to any child. His picture along with her can be found in different sites.

He is the eldest son of the family. He is adorable boy.