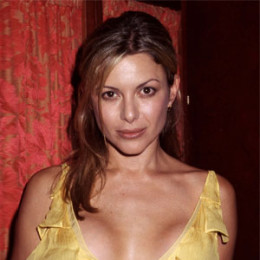 Kari Wuhrer was born as Kari Samantha Wührer on 28th April 1967 in Brookfield, Connecticut. She is the daughter of Karin, a payroll accountant, and German-American Andrew Wuhrer, a police officer, and car salesman. Kari holds American nationality with white ethnicity.

She grew up with her three siblings, Christopher, Scott, and Kim. Her father and grandfather played the piano, and her grandmother was a Jazz Singer. Kari attended New York University's Tisch School of the Arts, Marymount Manhattan College, Columbia University and Royal Academy of Dramatic Arts.

Kari Wuhrer's first television break was 'MTV's Remote Control' (1987). From 1991 to 1992, she was a regular cast member of the television series called 'Swamp Thing.'

She then played the role of Ariel Hunter in the long-running prime-time soap opera 'Beverly Hills, 90210' till 1995.

In 1997, Wuhrer worked on the television series named 'Sliders' as Maggie Beckett until the series ended in 2000.

From 3rd February 2005 until November 2005, Wuhrer joined the cast of the daytime soap opera 'General Hospital' as FBI Agent Reese Marshall.In 2014, she worked in a movie named 'Sharknado 2: The Second One.'

In 2001, for her work in 'Do It for Uncle Manny,' she won New York International Independent Film and Video Festival in the category of Best Actress.

Wuhrer used to sneak out of her family’s home to sing at nightclubs and became a member of the band 'Freudian Slip.'She released her debut album Shiny in 1999. She wrote most of the songs and even played guitar and flute in some of the tracks.

Kari was one of the sexiest women of her time and her beauty was admired by many. She was voted #76 on FHM 100 Sexiest Women of 2000 and in 2001 she was #73. In 1999 Maxim magazine ranked her #36 in 50 Sexiest Women Countdown. Wuhrer also posed semi-nude for Playboy magazine in August 2000. Further, she was ranked #4 in the Celebrity Nudity Database's Most Popular Actresses of 1999.

In January 2006, Kari Wuhrer stated that she was fired from a daytime soap opera 'General Hospital,' because of her pregnancy the case was resolved in December 2006.

Kari Wuhrer married Daniel Salin in 1995 and the couple divorced in 1999.The couple was together for five years.

She married James Scura, a film producer in 2003.The couple is blessed with three beautiful and healthy children.